AP:  Joe, Welcome to ALL PULP.  First, tell us a little about yourself please, sir! 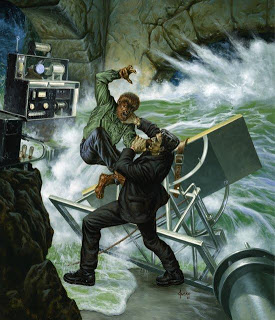 JJ: Thanks! I’ve been a professional illustrator since 1978 when I sold my first cover to Heavy Metal magazine at the age of 18. Since then I’ve worked for just about every major comic company producing everything from covers to posters, trading cards, and fully painted sequential stories.
AP:  You are involved in the FRANKENSTEIN MEETS THE WOLFMAN project coming up in FAMOUS MONSTERS OF FILMLAND magazine.  How did you get to be a part of this adaptation?

JJ: Facebook is a wonderful thing! Martin Powell and I follow each other’s pages and realized we both had a love all things monster in common, particularly the old Universal Monsters films and Famous Monsters of Filmland magazine. Martin contacted me to inquire as to my interest in painting the cover to his filmbook adaptation for FM and I jumped at the opportunity! I have wanted to see that Famous Monsters masthead over a piece of my art since childhood. I can’t believe after all these years it’s actually happened! Cross one more thing off of my bucket list!
AP:  The cover you’ve done for the magazine the adaptation will appear in looks fantastic.  Was there any particular scene or maybe even other influence you drew inspiration from for that cover?
JJ: Well, when you think of that film the (much too brief) climactic fight is invariably the first thing that comes to mind. If you were going to paint one image to represent the movie that would have to be it! I had seen it painted before but without the surging water from the exploded dam. That is such a dramatic element I knew from the very start I’d be including it in the painting. I had thoughts about showing the dam blowing up through a window but decided against it for compositional and narrative reasons. If you know he film you know where the water is coming from and if you don’t maybe you’ll want to find out. 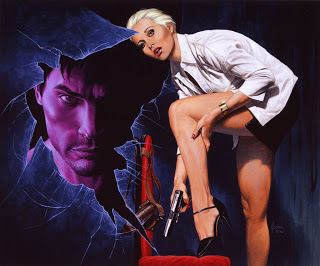 AP:  As an artist, can you outline your process of creating a painting or drawing for a project?  Are there any steps you go through, any particular techniques you use each time?
JJ: Geez, that is such an involved answer. Actual steps vary from piece to piece but in general I first try to determine what scene will make the most effective and eye catching image for the cover. It’s my job to get the potential reader to pick up the magazine in the first place. Once I decide on a scene I’ll work up a quick layout or two to see if my idea will work. I very seldom do more that one or two because my instincts are pretty well honed by now and I pretty much feel my first idea is always my best. Ninety percent of the time, at least.  I’ll then send the sketch the editor/AD for approval and then proceed to the final art. I either photograph or gather the reference I’ll need for a particular job (in this case I scoured the internet and shot screen grabs from a DVD) and refine the initial idea before proceeding to paint. I work exclusively in quick drying acrylics which I find suits my temperament as I’m a very impatient painter and dislike waiting for stages to dry. I then scan the final art, clean it up in Photoshop and send it off to the client.

AP:  What appeals to you as an artist about the monsters like Frankenstein and the Wolfman?
JJ: For me it’s the nostalgia and visual interest of the films. I think the Universal Monster series had some of the most imaginative set design and atmospheric cinematography that gave them a very unique look and feel. Many have tried to emulate them but never really seem to come close. Jack Pierce’s make up also set the standard for how those creatures should look. When you think of Frankenstein you think of Boris Karloff, not Kiwi Kingston.
AP:  One question some might ask about this project is relevance.  Is this a project aimed at old fans of classic monster movies or is it a project that hopes to bring in new fans?  What role do you feel art plays in that?

JJ: Let’s face it, Famous Monsters has a fairly classic, older fan base. While I truly hope the revised magazine and the art will generate new interest among a younger demographic, based on how little interest my fiancee’s 18 year old son has in reading magazines of any kind, B&W movies or anything not digitally enhanced I’m not sure. I know that many of my friends who are painting covers for FM’s current incarnation are doing it for the coolness factor and some very fond childhood memories. We are just beside ourselves to be on the cover!
AP: Art plays a major role in Pulp Fiction, both historically and even in New Pulp work.  Do you consider yourself a pulp artist and if so, why?

JJ: In many ways I do, and I often lament the fact that I was not working in the 60’s when pulp art was so prevalent in paperbacks. I am the biggest fan of artists like Robert McGinnis, Bob Abbett, Robert Maquire and Mitchell Hooks (among many others). I would be content painting pulp and genre covers all the time. I’ve done a lot of superhero work over the years but my real love is pulpy, noirish material. All the Conan covers I’ve done as well as the Edgar Rice Burroughs work definitely falls into that category to be sure.
AP:  What other projects do you have in the works that might be of interest to our Pulpy audience?

JJ: Harkening back to the previous question I’m actually producing a series of faux 60’s style paperback images for a proposed calendar, and Im having a blast! I’m also currently painting the monthly covers for Dynamite Entertainment’s adaptations of Edgar Rice Burroughs’ Barsoom series. You can’t get much pulpier than that! I also may be illustrating the first two Tarzan novels for the 100th anniversary but that is still uncertain as of this time.
AP:  Joe, thanks for your time!
JJ: My pleasure!
Share