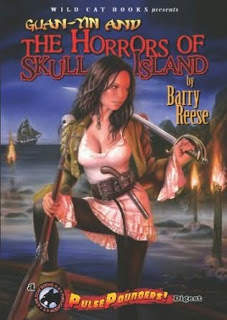 One of the best things about Pulp fiction is that since it was a medium that arguably has grown into its own genre, it is rife with all sorts of sub genres one can write within.   One story by one author can be a masked vigilante tale, then the next a straight western, and the third a science fiction ‘what if’ and all three will still be called Pulp.  The stories are more varied and authors are thankfully allowed to be more versatile, to take chances outside of the sub genres they are known for.

Barry Reese, known for his hero, THE ROOK, and most recently for LAZARUS GRAY as wellas a plethora of other tales and such, took just such a chance two years back by walking the plank right off feet first into a pirate tale that also doubled as a mash up of sorts.

GUAN-YIN AND THE HORRORS OF SKULL ISLAND focuses on a saucy, talented, and smart female captain of a pirate ship.  Helming THE LOTUS BLOSSOM, Guan Yin is a pirate that can stand her own with sword, fist, and pillaging up against any man calling himself pirate, but she is also a woman with a mission.  As a child, Guan’s pirate father went on one more escapade and never returned.  Growing up in his shadow and eventually filling his figurative boots, Guan Yin harbored for years the hope of finding out what happened to her father.  That hope is answered when a strange African, M’buku tells her that a great treasure awaits him, her, and her crew on an island draped in mysteries and myths.  An island where, according to M’buku, hints of what happened to her father, also exist.

This book is a quick read, both short in length and traveling at a break neck speed.  The characters often start off as stereotypical, but Reese throws a little bit of that exploration and realization that he is known for, adding a bit of flesh and fat to the bare bones of the words he writes.

Is this book a definitive tale rife with pirate lore and nautical fact?  No.  GUAN YIN is not to be held up in comparison to Sabatini and other pirate classics, but I don’t believe that was necessarily the intent. Is this Reese’s strongest entry into the Pulp genre?  No.  But this is a fun romp through a Pulp trope with a certain large monkey and his worshipping natives froma  certain hollywood classic thrown in for good measure.  GUAN YIN is the tale that we all imagine we’d like to write and/or live as we’re growing up and Reese did one of those and for that imagination, he did it well.

THREE OUT OF FIVE TIPS OF THE HAT-A great romp on the high seas worth the read.