HANCOCK TIPS HIS HAT TO ‘THE MYTH HUNTER’! 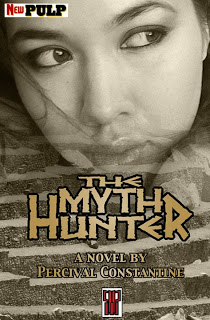 One of the great things about New Pulp is that the old is often made, well, new again.  I’m not simply talking about styles, description, or even storylines and characters, although this has to do with a character.   What I’m referring to is archetypes.  They exist in Pulp as they do in genre, probably more so since there are so many facets to Pulp.  The standard ‘types’ of heroes and villains and such that populate stories and often reappear under different names penned by different authors.  Like the masked vigilante.  The Super Man of Science.  The Cowboy.  And the Explorer, the Archeological Adventurer.

It’s that last one that Percival Constantine tackled within his new work, THE MYTH HUNTER.  Elisa Hill, the central character of the piece, is just what the title implies..a Myth Hunter.  This is basically an individual who goes on the hunt for strange and unusual artifacts, often thought to be the stuff of legend.  In this particular tale, she is in pursuit of artifacts related to a great lost civilization, a goal her parents pursued to the ruin of their professional reputations before their passing.  Initially a Myth Hunter for money, Elisa found a better path due to an old Myth Hunter and friend of her parents and now works for the betterment of the world.  This adventure brings her into contact with shady aspects of her dubious past, introduces her to new friends, sets her against a conspiratorial secret organization, and renews a feud with a psychopath named Seth that will likely be the death of Hill herself.

This book is full of vivid descriptions, fantastically crafted narrative, intriguing and engaging dialogue, but its biggest star is the characterization.  Constantine brings each and every character to life, not just with vivid details, but with emotions and passions.  Even the characters we are meant to like leave us feeling a little divided on just how much we like them, and that’s a sign of humanity granted to a written creation, a skill many writers never ever develop.

Constantine also takes the stereotype of the ‘Indiana Jones-Lara Croft’ type and ups the ante.  Elisa is complex, complicated, and admittedly confused throughout the book.  Not because she’s not a great hero in all ways because she is just that, but because she is also human.  Simultaneously Constantine gives the reader a real woman, complete with desires, flaws, and strengths, and cloaks her in that nearly bullet proof visage of the explorer who always gets what she wants one way or the other.

There were some continuity gaffs here and there and editing issues in spots, but nothing that should keep anyone from picking up THE MYTH HUNTER by Percival Constantine and enjoying the heck out of it!

FOUR OUT OF FIVE TIPS OF THE HAT-This New Pulp tale delivers everything you want a Pulp story to with the added bonus of humanity within its characterization.