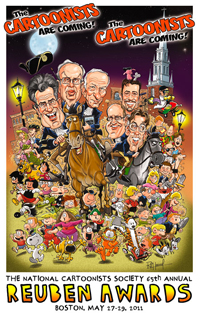 The annual National Cartoonist Society annual awards were awarded Saturday night. The prestigious Reuben Award for cartoonist of the year went to Richard Thompson for the newspaper strip Cul de Sac. Jill Thompson was selected as best comic book artist for Beasts of Burton, beating out Stan Sakai and Chris Samnee, and Joyce Farmer and her Special Exits took home the prize for graphic novel, beating out Daryn Cooke and James Strum.

The NCS 65th annual awards dinner was held in Boston over the past several days. The artwork (above) was contributed by Mad Magazine’s Tom Richmond.