ALL PULP INTERVIEWS THE FACE OF NEW PULP-THE PULPTRESS!

AP:  It is indeed a pleasure to have you at ALL PULP today!  I’m fairly sure this will be a short answer, but can you tell us something about you personally?  Some background maybe? 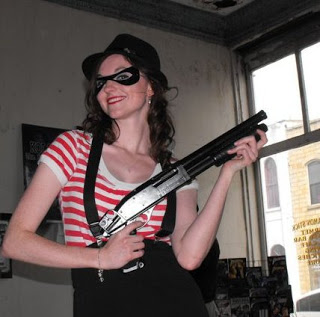 PULPTRESS: (laughs) Sorry, but the mask is my free pass on most of that question.  Let’s see, I’m twenty something…maybe.   I have august red hair…unless I don’t.   My eyes are brown with hints of green…except when they aren’t.  I’m just your every day average girl…who can use any weapon put in her pretty porcelain hands.  I will say that I came into the world much like everyone else did, even though things changed dramatically not long after my auspicious beginnings.   But looking back on it, I don’t think I’d change a day.  Except maybe one, my ninety third one, so I’ve been told.
AP:  Your…when you were three months old.  That would be when your parents…
PULPTRESS:  Yes, when they disappeared.    They were well known in the Pulp crime fighting circle, probably the best known.  I haven’t been told much about them, only that they had made a plan in case something like….them disappearing happened.  Which it did, so I’m thankful they planned ahead.
AP:  Best known?  Many people speculate that your parents weren’t just any crimefighters, but-
PULPTRESS:  Ah, ah, ah. (shaking a single red nail tipped finger playfully) Not something to discuss on, off, or even to break a record.  I didn’t have them at all that I can remember, but they gave me the next best thing.  A family like none anyone has ever had.
AP:  Yes, you had a particularly interesting raising.  Can you talk about that at all?
PULPTRESS:  Enough just to tease your readers, certainly.  The plan that my parents had devised in case of their…being unable to raise me was basically the next best possible option.  I was left with one of my parents’ closest confidantes until I was able to walk and talk. At that point, my training began.  I have lived with Cherokee Indians, Inuit tribesmen, Shinto priests, and any other group of experts in anything you can think of.  I’ve been taught every style of fighting by the fiercest warriors, academics by today’s greatest minds, science and other disciplines by people that most only believe are legend and rumor.  From my first steps until my 18th birthday, I was steeped in disguise, strategy, espionage, and every learnable skill, field, and technique that the world had an expert in.
AP:  Really?  To what purpose? 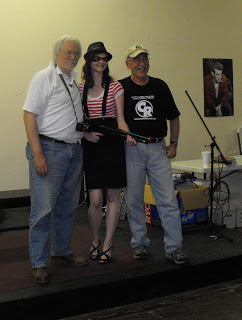 PULPTRESS:  That’s another thing wrapped in innuendo and smoke.  Some say that there’s a greater good I’m being prepared for, something my parents knew I would have to be ready to face.  Others say it wasn’t so grand, that they just wanted to groom me to follow in their footsteps.  (Chuckles)  There’s a few who think that I was brought up that way because it was the only life my parents ever knew.  Regardless, I consider myself the luckiest gal in the world for the way I came up in the world.
AP:  And now that you’ve survived until adulthood, you seem to actually have taken up where your parents left off.  Why?
PULPTRESS:  Not just my parents, but most of my foster family as well.  And the why is fairly simple.  Even though I learned many different things from all the teachers and mentors I had around the world, they each imparted one common idea to me, almost a mantra.  ‘Regardless of how the world changes, it will always need a Hero.”  I had other options, choices I could have made.  Any career I wanted was an open door.  But those words were etched in my heart and wear heavy on my mind every day.  And there’s not a truer statement.  So, yeah, that’s why.
AP:  Interesting.  All right, what is it you do, then?  How do you describe your chosen vocation?
PULPTRESS:  Adventurer, Explorer, Problem Solver, a gal who likes a good fight and is good at fighting?  All of those fit and a few more.  Basically I’m the person that Henry Fonda described even better than Steinbeck himself wrote it.  Wherever someone is need, wherever someone is hurt and abused, wherever there’s absolutely no chance to survive, no way out, no justice at all, I am there.  I do all I can to meet the need, fix the hurt, save all I can, cut a door where there isn’t any, and bring justice in the prettiest package ever.  That’s what I do.
AP:  And on top of that, you recently debuted as the public face and voice for Pro Se Productions and even more than that, for the New Pulp Movement at the recent first PULP ARK Convention/Conference.  How did that happen? 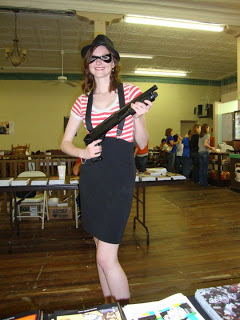 PULPTRESS:  Have you met Tommy Hancock?  That man could talk the North Wind into blowing from the South if he wanted to.  (Laughs) Among many of the attributes that I picked up through the years was reading.  I often would rather read than eat and sleep and almost more than punching bad guys.  (Grins) Almost.   I’ve read thousands and thousands of volumes, tomes, and manifestos, but my favorite genre has always been Pulp.  I know, right?   But it has.  The classic heroic fiction rendered by Gibson, Burroughs, Dent, and others has a special place in my heart.  Part of that has to do with it being so reminiscent of people I have known throughout my life, heroes who lived Pulp lives all their own.
When I got to know Tommy due to our paths crossing, and that’s a tale someone should one day write, he exposed me to the writers and artists that have made New Pulp the force it is today.  And he brought up the fact that many consider me the New Pulp Heroine of the 21st Century and that New Pulp, while continuing the traditions established by the classics, is its own Movement, so there’s a relationship of sorts between the two.  And it doesn’t hurt a girl, even one in a mask, to be associated with the best stories told today for the readers of tomorrow! 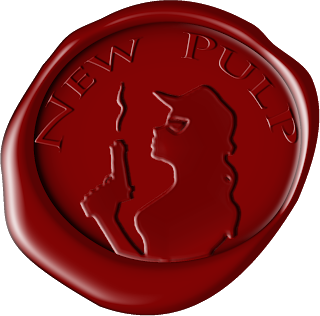 AP:  So, you signed on just because you liked to read Pulp?  Or is there more, does New Pulp have an importance all its own?
PULPTRESS:  Of course it does.  Actually, it’s the same importance, the same mission that I feel like I have.  Regardless of how the world changes, it will always need stories about Heroes.  New Pulp provides that in spades and aces.   You don’t just get a rapid action high adventure tale with New Pulp stories.  You get ideals to reach, models to follow, and the reassuring fact that no matter how dark reality gets, the light eventually shines through.  You can’t get more important than that.
AP:  What about your stories?  Any plans for a New Pulp writer to tackle the life and times of The Pulptress?  Or are you more of a to yourself kind of girl? 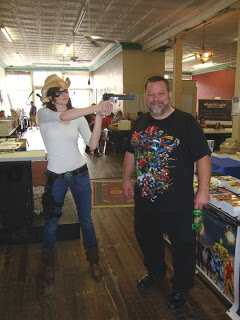 PULPTRESS:  Are you kidding?  The lady who, depending on what the adventure is, comes dressed as a cowgirl, a space explorer, pirate, or whatever fits being a to herself kind of girl?  Yeah, right.  Stories are not only underway, but multiple authors, like Barry Reese, Derrick Ferguson, Ron Fortier, and Robin Bailey, are already committed to a collection spotlighting me and my rollicking adventures. The collection, when ready, will be available from Pro Se Productions. And, on the ball as he is, Tommy has already completed one story about me in the Big Apple and is hard at work on another one…one about me at home.

PULPTRESS:  Home is…the only place where The Pulptress isn’t.  Other than there, I can’t be…don’t want to be anything other than The Pulptress.
AP:  And the New Pulp Movement and the world are thankful for that.  Thank you so much for taking time to talk to ALL PULP.
PULPTRESS:  Hey, anytime.  It’s not often bullets stop flying and villains stop trying to conquer the world long enough for me just to visit. So thank you!


(Want to follow The Pulptress daily?  Then join ‘The Pulptress’ Page on Facebook!!!  And follow her here at ALL PULP, as well as at pulpmachine.blogspot.com and http://www.newpulpfiction.com/!) 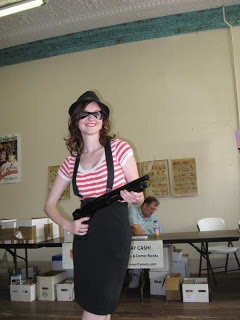