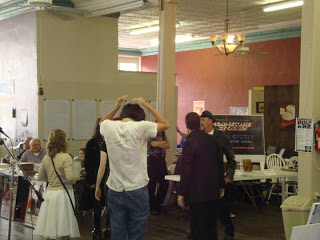 While there were three scheduled acts of THE CASE OF THE BLOODY PULP throughout the weekend, there was also a rousing impromptu fight scene amongst the principals on Saturday.  Following that, new characters joined old and the story continued….

THE CASE OF THE BLOODY PULP, ACT TWO

PENNY-Now, really Captain.   It’s not necessary to come all this way with us.  You’ve done a fine job in helping me, but surely you have other things to do.
CAPT’N-Miss Preston, I told ya once, I told ya twenty.  Ya hired me and my mate Buster here out of a bar in the South Pacific-
BUSTER-Nope, Capt’n Mordechai, you were in the bar, I was workin’ on the plane engine.  I’m always workin’ on the plane engine.
CAPT’N-Easy, Buster…Ya hired us to help ya get that scrap of sack ya got there…
PENNY-Parchment, Captain.  A piece of ancient parchment.  The last piece I needed to wrap up this story for my newspaper.
LITTLE SISTER-Parch…parchme….I thought it was paper, Penny!
PENNY- Quiet, little sister.  It is paper.  Old paper.
LITTLE SISTER-That old people wrote on!
BUSTER-Not old people.  Ancient people, people who lived a long time ago..
LITTLE SISTER-Don’t know about that…but its old people, old like you!
BUSTER-Why you- I’m not all old, I’m barely sixteen- I’m
CAPT’N-WINGFLAPS AND TAILWINDS, WILL YOU BE QUIET?!? (Calms down) As I was sayin’, Miss Preston, you hired us and Capt’n Mordechai Maelstrom sees out any job he takes to the very tip top end.  From the time my Gone Gander leaves the ground till the last time it lands.
PENNY-Yes, I see.  Well that would have been the return trip to New York so I could secure this parchment with the Museum, then finished my feature article.  But when we got that phone call, mysterious as it was, telling us the JC Givens ‘Bloody Pulp’ was on display at this convention, we just had to come here.  This could be the end of the greatest mystery of the 20th Century.
CAPT’N-Aye. Or the end of somethin’ else.
PENNY-Such as….
BUSTER-He gets like this every time something disrupts a flight plan.  He means our lives.
CAPT’N- Goin’ off course never means good for nobody.  ‘Specially when yer dealin’ with….things that go bump in the night.
LITTLE SISTER-Monsters?  We’re dealin’ with monsters??
PENNY-No, no Little Sister, Capt’n Mordechai’s just being melodramatic.  It happens when people get ‘ancient’.
CAPT’N-Say what ya will, lady.    It’s been said before and worse.   But I’ve seen scrawl like that on that there scrap you have.  And it’s never meant nothin’ but agony and despair.
PENNY-I don’t rightly know that it means anything more than some long dead person’s shopping list, Captain.   We might find out more if we knew who’d called us to come here.
ROGUE-(He must walk up behind Mordechai) That, my dear intrepid lady reporter, would be me.
PENNY-You?  And who might you be?
ROGUE- I am Si-
(Mordechai turns and sees the ROGUE and interrupts)
CAPT’N-Why I’ll tell ya who ya have here, Miss Preston.  The triple crossingest, back stabbin, no good for nothing wastrel the world has ever produced….
ROGUE-Now Mordechai-
CAPT’N-Been a long time, Rogue.
ROGUE-Yes…indeed.  What, three years?
CAPT’N-Four.  See, I kept real good count because I spent a year of that lost in the Himalayas eatin’ what friends I made brung me.  And you said it would be in and out, save the world you said.
ROGUE-Why yes, I probably did say that.  You know me, though, Mordechai, I am my whole world. So save the world, line my pockets, you say tomato and I say-
CAPT’N-Your prayers.   (fight between them that stops when-)
PENNY-STOP!  We do not have time for this! I have a deadline to meet!
NIKOLA-(Appears suddenly) She is right.  There is no time for this!  And my deadline, that set by my dearly departed parents, is long past!
BUSTER-Well I’ll be gassed and gone!  Who is THAT?
NIKOLA-I am the reason you are here, handsome boy.
PENNY- But I thought that this man here-
CAPT’N-Another lie from the lips of The Rogue.  ‘Magine that.
ROGUE-Again, Capt’n, what you call a lie, I saw as an opportunity.
NIKOLA-A missed one, Simon Sanders.  One that, were I not so distracted with other things, would cost you your life.
ROGUE-Thank goodness for your short attention span then.
PENNY-All right, I really don’t understand any of this.  All I know is I was told the Bloody Pulp would be here and I would get to look at it to add to my story.
NIKOLA-Oh, indeed you shall see it, Miss Preston.   And if you’re foolish like others here, it may be the last thing you see…or you could live in the new world…one that will be born from ashes and fire when I am done!  That will be a story to tell!
ROGUE-Too bad that little news hawk of a kid snatched it and ran off.  You and your trained retriever have looked a whole day for him.  And still no bloody pulp.
NIKOLA-Yes, a whole day we looked! And in the last few minutes, Mr. Sanders, we FOUND! August, come!
(August comes in, dragging Newt by the arm, the pulp in one hand along with Newt’s newspaper bag)
AUGUST-Yes, Madam! I am here and so is this worthless criminal!
NEWT-LEGGO A’ ME…..LEGGO!
AUGUST-(throws him to the floor) Gladly!  He hid from me, Madam and even when I found him, he fought.  He hit me with this bag, but it was not filled with papers, but with BRICKS! But it was not enough! I still caught him!

NIKOLA-Yes, August, you did.  Of course hitting you with bricks in the head would not harm you.  There is nothing there to harm!  But now, (she takes the pulp) I have one half of the two piece puzzle.  And you, Miss Preston…you have the other half.   And you will give it to me.
CAPT’N-Heck and high water she will!  You just hold onto that scrap, Miss!  Keep it close!
ROGUE-As much as I hate to, I have to agree.  I know a bit of what Nikola thinks that parchment you have will do when put with that pulp magazine!  And none of it’s good.
NIKOLA-Silence!  What do either of you fools know?  Nothing!   No one knows what is good for this world but me!  My parents, the genius Dr. Nikolai and the beautiful adventuress Lady Devereaux, they knew that the world needs to be bathed in flame and death so it can live as it truly should be!  And they taught me this, showed me, did things to me to make me the only person able to lead this new world!
BUSTER-Capt’n, I hear the airways callin’ us….
PENNY-I really don’t understand any of this, but it smells enough to tell me that there’s no way you’re getting this parchment!
NIKOLA-Oh, but there is one way….
(NIKOLA snatches LITTLE SISTER and holds one of her sharpened nails, knife, etc to her neck)
LITTLE SISTER-Help! Let me go! Penny, help!
NIKOLA-Yes, darling Penny.  Help her, won’t you?  If you don’t….I will.
CAPT’N-Miss Preston, don’t!
ROGUE-Back up, Mordechai (gun drawn)

CAPT’N-You lily livered-
ROGUE-Again, perception….I’m just tying up with the winning side.
NIKOLA-Ilk of your sort always drifts to the top.
ROGUE-We’ll discuss how high later.
BUSTER-Whatta we do?
PENNY-I…I don’t have any choice.  She’s…got my sister.  Here.  (hands her the parchment)
NIKOLA-Yes! (As she takes the parchment in one hand and the pulp in the other, Capt’n and Buster both get ready to charge, but Rogue and August step forward, guns ready. Nikola shoves LITTLE SISTER away and grabs Penny and holds her hostage).  Now I have everything I need!
CAPTN-What in the flyin-  Let go of ‘er, you got that bit of rag you wanted.
NIKOLA:  Many believe that the parchment is a key, something to use to translate the words in the stanza…but it’s more than that! (She opens the pulp and lays the parchment on the page)  It is a lens, a mystical window that when laid on the stanza, on the incantation makes it clear as day to read! Yes, even now the lines and symbols are twisting into words! I can read it!
(Merlin and Bim bust in)
BIM-We’re too late, Merlin!
MERLIN-Nikola, stop!  You can’t know the whole story!  If you did, you wouldn’t-
NIKOLA-Oh but I do know, Merlin!  And I will!   I will release the greatest evil known to the universe and lead it around like a whimpering hound on a leash!  (Turns gun on Penny) Read it, girl!
PENNY-No!  Please, no!
NIKOLA-Read it! You will enjoy it so much more than dying!
PENNY: “Death and hatred,  take you life!
Murder and sin, become flesh and bone!
Walk this earth and spread your strife!
‘less you are laid low by man crafted stone!
(Lots of hubbub, smoke, whatever can be managed) Penny collapses and rises up again as SHEVARA
LIL SISTER-PENNY!!

SHEVARA-WHO TEARS AWAY THE MYSTICAL CHAINS THAT BOUND SHE WHOM ALL FEAR?  WHO DARES RISK THE ENTIRE WORLD TO SUMMON SHEVARA?
NIKOLA-That will be I, Nikola Devereaux…new Mistress of this World and your Keeper!
SHEVARA- (laughs evilly)  SHE WHOM ALL FEAR KNOWS NO KEEPER! AND THIS WORLD WILL BE NOTHING BUT A MORSEL AND YOU ALL CRUMBS!
NIKOLA-What?  No, I command you to-
SHEVARA-YOU COMMAND NO ONE! (Waves her hand and the whole cast freezes)  THIS IS MY STAGE NOW! (she wavers) BUT…YEARS DETAINED…HAVE WEAKENED ME….AND THERE IS NOT ENOUGH HATRED AND HORROR HERE…I MUST GO FEED….BUT SHALL RETURN TO CLAIM ALL THAT IS MINE..STARTING HERE! (Puff of smoke and she’s gone)
BUSTER-What just happened??
NIKOLA-(drops to her knees) I…Mother…Father… I have failed…
MERLIN-I think humanity just all ended up on the same side.
BUSTER-This could be…the end of the world.
BIM-Don’t worry, we’ve been there before.
END OF ACT TWO