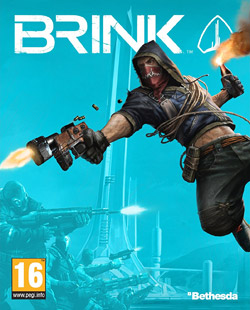 The genre of First Person Shooters (or FPS) in an already over-saturated video game market is a risky venture.  In order to succeed in a sea of Halos and Call of Dutys, one must be unique, or offer something that will appeal to the masses.  Developer Splash Damage is hoping that [[[Brink]]] (out now for PC, PS3 and Xbox 360) is such a title.  Utilizing a unique graphical style, and taking note of some of the lesser-used conventions of modern shooters, Brink aims (no pun intended) to be the next go-to online shooter.  But does it hold up to expectations?

As far as the story is concerned, you play as one of two factions – the Security or the Resistance – on a floating barge of a city known as The Ark, the last bastion of humanity in a world gone crazy.  Honestly, the story really doesn’t get fleshed out in gameplay, but more in audio logs you unlock as you progress.  As the factions, you have a series of objectives per level to complete, and it’s here that it becomes obvious this game is built with multiplayer in mind.  There are four classes to play as: soldier, operative, medic and engineer, and each has their own special abilities, for which the goals and objectives may be suited.  Soldiers can set charges to blow open doors or open shortcuts, operatives can disguise themselves as the opposing teams and hack safes and computers, engineers can defuse enemy placed bombs and repair things, and medics can heal and buff teammates.  In single player, this means that you will be changing class a LOT, as the AI of your team leaves much to be desired and won’t do many of these tasks for you.  Luckily, you can change the settings on the single player to allow friends from online to join you in your fight.

Strangely, this almost matches the actual online component.  Known as Freeplay the online mode of Brink dumps you into a player match of 8 on 8…in the EXACT same scenarios as the single player missions.  Why there would be a single player AT ALL here is beyond me, as these missions really benefit from multiplayer play.  Well, for whomever the mission is designed, that is.  See depending on what faction the mission is structured for all but determines the outcome of said mission.  If you’re playing a Resistance mission as the Security…prepare to lose, as spawn points will be near the objectives for the opposing team, and endless number of respawns ensure that no matter how hard you fight, there’s always someone else coming up to shoot you in the head.

To say it’s unbalanced is a understatement, as some levels are the exact opposite, designed with specific choke points to give the opposing team an upper hand.  What’s more, the games touted SMART system (Smooth Movement Around Random Terrain), that allows characters to seemingly parkor over hazards, doesn’t have all that many designs in-level with the system to be utilized.  The objectives are also unbalanced.  In a Resistance level, your goals may be to blow open a door, hack a safe, grab a data key, and get it to the end of the level.  As the Security in the same mission, you goal is…to stop the Resistance.

At least there is some customization.  You can design your own character for the battles, and costume pieces and weapons are unlocked as play progresses.  For better weapons (well, better LOOKING weapons, as they all basically act the same) you can play through the tiered challenges, though even those are just glorified tutorials.  Once you reach level 20 in your characters rank (after earning XP for kills, objective completion and such) there’s no higher rank…and by then, you’ll have unlocked EVERYTHING.  There’s nothing further to do other than create a new character and start again.

As for the online play, that’s a bit muddy too.  Beyond single player with allowances for friends to join, Freeplay is a laggy mess.  There apparently is a patch coming, but this is really something that should have been fixed before the games release, as it’s clearing a server issue, and not just for certain players, as everyone I spoke to who played it had the same issue.  Granted, I didn’t speak to them in game…that would have made sense.  See, despite having folks play with you on your faction online, the only noise you’ll get through the headset is in-game chatter from the game itself.  If you want to speak to your teammates, they have to already be your friends playing on your team, or you have to all sign in under a “fireteam” while online in a match.  It’s a long, round-about way to organize attacks or have your pals watch your back while you plant a bomb or hack a computer.

Brink had great potential.  If given 6 more months to cook, it probably would have turned out great.  As it stands now, however, it feels unfinished, but there are glances of the game it COULD be.  Multiplyer online can be fun for a few rounds, but after a while, you’ll wish for more varity and balance in the missions.  Hopefully, some DLC levels will allow for that, as well as a better use of the SMART parkour system.