Pulp IS History!!!
History of the Pulps Part 3
By Mark S. Halegua
Yes, that’s right, I said part 3.  So, you’re wondering where are parts 1 and 2?  You haven’t seen them on All Pulp.  So, where are they?
They’re on comicrelated.com.  See, I started writing a pulp blog there and the first two were on the history of pulps, the first pulp magazine (Argosy) and the ones that followed.
But, then Tommy Hancock said, “Hey Mark, will you write a blog for All Pulp on the history of pulps?”
So, I’m thinking, “but, I’ve already started that on comicrelated.com.  If I were to do that I’d be essentially writing what I’ve already started and it would be on two blogs.  Not cool.  How can I differentiate the two?”
A thought came to me.  What if I did the history for All Pulp and something different for comicrelated?  Something maybe more pertinent to comics?  Something interesting about pulps but of more interest to comic book people?
So, here’s the deal, which the kind people at comicrelated.com have agreed to.  I will write there about pulps, but not pulp history.  I will write on All Pulp about pulp history.  And, when I think people need to know about something I’ve written on one or the other site, I will publish a link to it.
The last blog I sent to comicrelated.com was about the recent Windy City Pulp and Paperback convention in Chicago, which I attended as both a dealer and a collector.  If you want to read about that, go to: http://comicrelated.com/news/11678/pulp-1st-returns!
It also has links to some interviews and other things I digitally recorded about the con on YouTube.
You can read the first two parts of my history of pulps here: http://comicrelated.com/news/10971/pulp-1st-debuts
and here: http://comicrelated.com/news/11060/pulp-1st-returns.
So, that brings you up to date so far.
So last we looked Railroad Man’s Magazine had just come out and was the first pulp to have stories, in this case fiction and non-fiction, about the railroads, and only the railroads.  The first pulp to focus on one genre.  All previous pulps were general fiction, mixing genres.

The next four pulps published were all from Munsey, The Ocean, The Live Wire, The Cavalier, and Munsey’s.
The Ocean published stories occuring on the ocean.  The Live Wire, I don’t know what was published.  If anyone knows, please inform me.  It was a short lived pulp,  starting in February 1908 and ending, or chainging its title, in September 1908.  The Ocean was also a short lived pulp lasting about a year.
The Cavalier was another genaral fiction pulp which lasted several years, till 1914 and 163 issues, before folding into All-Story.  This was a common thing to do to keep the subscribers with the company. 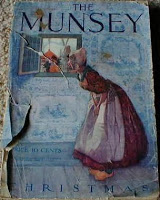 Munsey’s started out as a slick magazine and was converted in 1909 to a pulp.  It was also a general fiction pulp.
In 1909 another title converted from a magazine to a pulp.  Short Stories, one of the longest running of all pulps which for most of its history as a pulp published twice a month, on the 10th and 25th of every month.  It was also notable, starting around 1921, for including a red sun on each issue cover.
In 1910 two more pulps were introduced, one by Street and Smith the other by the Ridgeway Co.  These were Top-Notch and Adventure.  Both were general fiction pulps with Top Notch slanting the stories to a younger audience. 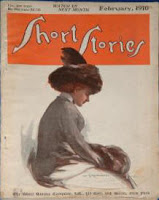 With this the Big Four were now publishing.  Argosy, Blue Book, Adventure, and Short Stories were considered the top pulps, consistently producing best stories and would do so for decades.
In retrospect two others should join these four as notables, All-Story and The Popular.  The Popular in particular was noted for authors starting their careers there and moving on to the higher paying slicks.

Over the next years to 1916 several new pulps would come to the newsstands: New Story, Snappy Stories, Women’s Stories, Romance, Live Stories, Clever Stories, Tip Top Semi-Monthly, Parisienne Monthly, Breezy Stories, Detective Story, Wide-Awake, All Around, Thriller, and Saucy Stories.  So, in this second decade of the pulps 20 new titles were published.  Not all lasted, some lasted a very long time.  But the notables, were Adventure, Short Stories, and Detective Story.

Detective Story was the first all detective and mystery pulp.  The term mystery would have a different meaning for pulps in the 30s and 40s, but this had detective and mystery stories.  Published by Street and Smith, it was renamed from its long running nickel weekly story paper titled either New Nick Carter or Nick Carter Weekly.  Street and Smith did something similar with it’s Buffalo Bill story paper and Western Story a couple of years later.
Women’s Stories published stories directed toward women’s interests and Romance was fiction about, well romance.  It lasted from 1914 thru 1916 and 28 issues.  No fewer than two other pulps with the same name would be published later.
Share