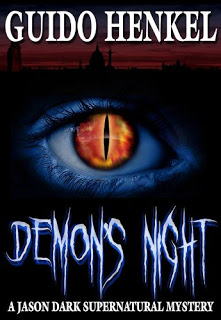 Enter the fog filled docks of Victorian London. A pair of golden eyes with black, reptilian slits stare back at you, suspended in a cloud of green mist. It soon takes prey on a lone watchman, wrapping itself around the man’s body, draining his life until he is nothing more than a leathery cadaver. A ship pulls into the docks, and as the men are unloading the cargo the mist makes it’s move yet again, taking both of them this time. It floats through the boxes, searching for something, but is unsuccessful. Angrily, it mentions a ‘Father’ and tosses the two bodies into the Thames.
This is how Demon’s Night, the first of the Jason Dark Supernatural Mysteries, begins, and the intrigue is instant. It pulls you in with it’s wonderful descriptions of foggy industrial London and the terrifying unknown of the mist creature that appears to drain people’s lives from their bodies. Then you are introduced to Jason Dark, the supernatural detective who notices the strange story of the dock killings in his morning paper. Not a lot is given to you right away, emotionally, but you continue to read because his interest is the same as yours. What exactly was it that did this to these men? What was it’s purpose?
It’s only when Dark stumbles upon the creature, having possessed a man’s body as it attempts to choke a young girl, that you feel an emotional connection with any of the characters. The girl, whose parents only moments before met their death with the demonic creature, fights with skill. Dark kills the human vessel and the demon scurries in fear of his knife. The question and wonder is there, but the dying need to find out why just wasn’t. The interest is primarily with the demon and even as its final mystery unfolds it feels a little empty.
Nevertheless, that isn’t to say Demon’s Night wasn’t enjoyable. In fact, quite the opposite. The story is perfect for the Novella sized Series to continue without becoming strained. Henkel’s writing style is easy to read but not simplified either. Sometimes a Gothic story such as this can be written in an overly poetic style, leaving room for confusion but Demon’s Night  strays from that stereo type. There are some spine tingling scenes, all of which manage to avoid the in-your-face violence some authors rely on. And despite any emptiness before, the end makes up for it. The words are beautifully written and it leaves you hanging with a few  questions that you want to know the answers to.
I’m sure the character development will grow as they progress and that characters like Siu Lin will reappear as well. I thoroughly look forward to reading Theater of Vampires, the next in the Jason Dark Supernatural Mysteries. The title alone already has me on the edge of curiosity.
Share