BEHIND THE VEIL WITH DERRICK FERGUSON!

BEHIND THE VEIL
Dillon and Race
By Percival Constantine 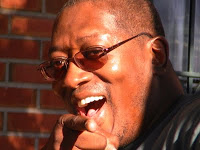 The character who first introduced me to pulp fiction is one that may surprise a lot of people. While I had grown up as a fan of James Bond and Indiana Jones, the first time I experienced a pulp story that I consciously knew was a pulp story was when I read Dillon and the Voice of Odin.
Dillon was my gateway drug into the world of pulp, and I’m forever in Derrick Ferguson’s debt for that. Derrick’s a guy I know personally, we’ve been friends for a while and we’ve had discussions on all manner of topics. Once, when talking about Dillon, Derrick told me that he received some criticism for pairing Dillon with Kris Quinlan, a woman of South American descent, as opposed to a black heroine. And a lot of that criticism came from black women.
And with that, I realized that there’s an interesting racial component to Dillon. It’s definitely not overt, it’s actually very, very subtle. When asked how important race is in the Dillon stories, Derrick said, “In terms of having a black action adventure hero who could stand shoulder to shoulder with Doc Savage, James Bond, Tarzan, John Carter of Mars, The Avenger, Conan, Solomon Kane, The Shadow, The Saint and a dozen other heroes, it’s very important to me. You have to understand something: I discovered this stuff during the 70s. And since there were no black heroes to read about, I had to read what was available. Not that it mattered to me. What resonated in my soul was the style and excitement of the stories being told. The morals and qualities of the heroes. To put it very simply, the pulps told stories I loved to read.”
Derrick is very clear that this played an important role in crafting Dillon and his world. “The creation of Dillon was directly inspired by my desire to create a black action adventure hero that I would have liked to read about when I was twelve years old. And not just be a white hero in blackface. But a hero unique unto himself, who would look at racial situations and at the world as a whole with a different eye.” 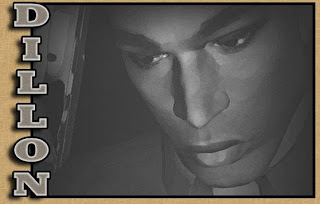 And here we come to another factor—Dillon truly does have a unique take on race. Something which also seems to come from Derrick’s exposure to the pulps while growing up. In my correspondence with him, Derrick tells of an incident, of which he says there were more than one, when he was on the train and reading a Tarzan novel. Three older guys sat next to him and demanded to know why he was reading “the white man’s racist trash.”
It’s obvious this had an impact on Dillon’s genesis, because while Dillon isn’t a white hero in blackface, he also isn’t a black hero whose stories are all focused on race—he’s a hero, period. And that unique perspective Dillon has on race? Here’s what it is: His age is unknown, but according to his biography (located at the Dillon site), he began hiring himself out as a soldier of fortune “some ten years ago.” Given this fact and the descriptions of him in the books, we can safely say Dillon is in his early or mid-thirties, at the youngest (he could very well be older given his unique physiology, which I’ll let you read about at the above link). So while a man Dillon’s age would have grown up in the Civil Rights era (or at the very least, immediately following it), he would have felt the sting of racism in one form or another had he grown up in American society.
But Dillon doesn’t have that experience—he wasn’t raised in American society or any other society we can identify with. “There’s a reason why I had Dillon raised in a hidden civilization far away from the cultures we know,” says Derrick. “He sees no reason why he should ally himself with a black cause just because he’s black or why he should be against a white cause just because it’s white. He was raised to judge individuals, causes and governments and institutions based on what they do, for good or ill.”
This is one of the very unique aspects of what Derrick’s done with Dillon. He’s a pulp hero in contemporary society, which already sets him apart from both classic and new pulp creations. But beyond that, there’s a very subtle undercurrent of progressive racial ideas that runs through Derrick’s work. And it doesn’t end with Dillon, it just begins with him. 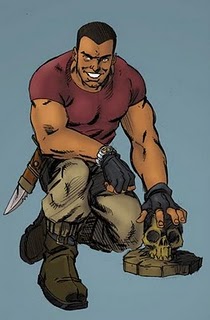 In Dillon and the Legend of the Golden Bell, there’s a very interesting scene in the fictional country of Xonira. In the book, Xonira is described as having been founded by pirate kings, mercenaries, and freebooters and that it quickly attracted many who were not desired in their home countries. As Lord C’jai of Xonira tells Dillon and his friends, “your typical Xoniran is a mixture of many different bloods. Take me for example. I can claim Ethiopian, Greek, Egyptian, Chinese and English among my ancestors. Most of the population of Xonira have similar mixing of different races in their personal histories. This mixture explains our polyglot of a language, our blending of cultures, styles and cultures.”
In Derrick’s own words, “It’s a country that hasn’t forgotten it’s populated by mutts. Much like our own beloved USA. The difference is that here we all either have forgotten we’re mutts or like to pretend we aren’t.”
Xonira represents a post-racial society, one in which culture, language and race have blended together. But Derrick isn’t so naïve as to believe that any society, even one which manages to transcend race, is perfect (anyone who’s read Dillon and the Legend of the Golden Bell knows they’ve got more than their fair share of problems). There’s still work to be done and there is no Shangri-La.
And although there’s quite a bit of keen insight and forward-thinking in Derrick’s work, he’s quick to take the modest ground: “I’m not out to enlighten or uplift. I leave that for those better qualified to do so. I’m just a guy who likes to make stuff up and share.”
__________________________________________________________
Percival Constantine is the author of Love & Bullets and The Myth Hunter (coming this summer). He lives in southern Japan and has entirely too much time on his hands.