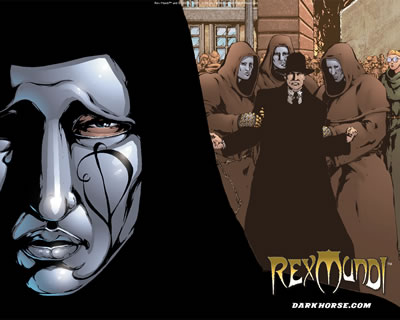 Heat Vision reports that the percolating film adaptation of  Rex Mundi, which is being produced by Johnny Depp‘s  Infinitum Nihil for Warner Bros. Pictures, has hired screenwriters. Brian Klugman and Lee Sternthal, who were among the credited writers for last year’s Tron: Legacy, have signed on.

The series, from Arvid Nelson and Argentinian artist Juan Ferreyra, has run a total of 38 issues, evenly split between Image Comics and Dark Horse Comics. The story is all about the quest for the Holy Grail, in Europe’s dark days just before the outbreak of World War II. The difference is that this alternate reality of 1933 presumes magic is real and feudalism reigns supreme. The Protestant Reformation was crushed long before and the Catholic Church has a stranglehold over Europe.

The character’s name means King of the World when translated from the Latin and the acclaimed storyline and came about when Nelson visited Europe and the dry history lessons came to life for him. He then imagined the ancient cities and their beliefs co-existing in a more modern setting. He also applied his personal Bahá’í faith to the religious subtext making the characters unique and memorable.

At first, Nelson worked with artist Eric J. when the series debuted in 1993 but they split over creative differences and after a break, the series resumed in 2005 with Ferreyra providing the artwork. The entire run can be found in six trade editions from Dark Horse.

A movie version has been kicking around for years with Depp attached. Fight Club‘s Jim Uhls write a script five years ago but the project stalled despite talk surfacing every few years.  Klugman and Sternthal share story credit on the critically reviled Tron sequel but to be fair, neither are experienced writers with Klugman better known as an actor. IMDB lists the film as coming in 2014 so there’s plenty of time to see what happens next.