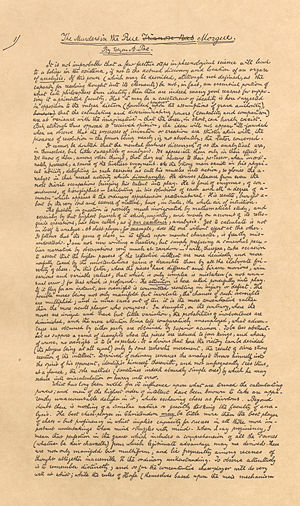 Facsimile of Edgar Allan Poe's original manuscript for "The Murders in the Rue Morgue", from the Susan Jaffe Tane collection, Cornell University. Image via Wikipedia.

On this day in 1841 in Philadelphia, PA, Edgar Allen Poe’s first detective story, “The Murders in the Rue Morgue,” was published in Graham’s Magazine.

It has been called the first detective story ever, with C. Auguste Dupin as the first true detective in fiction, the precursor of everyone from [[[Sherlock Holmes]]] to [[[Scooby Doo]]], from [[[Veronica Mars]]] to [[[Angel Investigations]]], from [[[Castle]]] to [[[Psych]]]. The Dupin character established many literary devices which authors have used ever since:  the brilliant detective, his friend who serves as narrator, and the last revelation being presented before the reasoning that leads up to it.

And of course, without detective stories, we don’t have Detective Comics… which means we don’t have either DC or Batman. Nor do we have the Elongated Man, [[[GrimJack]]], [[[Dick Tracy]]], Tim Trench, Richard Fell, Jason Burr, The Dead Boy Detectives, Jessica Jones, [[[The Maze Agency]]], or Detective Chimp.

So here’s to you, sleuths! To you we raise a glass (free of exotic poisons, we hope). May your locked room mysteries always have a way in and out.

Read “The Murders in the Rue Morgue” here.