It is with great sadness that we report the death of the actress Elisabeth Sladen – forever known to us as the Doctor’s best friend, Sarah Jane Smith.

Born in Liverpool in February 1948, Elisabeth Sladen took an interest in acting from an early age; she joined the Liverpool Playhouse repertory company as assistant stage manager after drama school, where she would meet her future husband Brian Miller. After a stint touring the country in repertory, she settled in Manchester, during which she had her breakthrough television role in 1970, appearing as Anita Reynolds in Coronation Street. More small roles were to follow in popular shows like Doomwatch, Z Cars and Some Mothers Do ‘Ave ‘Em.

Then in 1973 came what would be her defining role as she was cast as the replacement companion for third Doctor Jon Pertwee. Following in the footsteps of popular companion Jo Grant played by Katy Manning, Sladen was to hit the ground running as investigative journalist Sarah Jane Smith in her debut story The Time Warrior, and over the next three years would see her popularity soar as she became part of what is arguably known as the “golden years” of Doctor Who alongside fourth Doctor Tom Baker, an era including the story frequently appearing top of fan polls, Genesis of the Daleks.

Despite choosing to leave the programme in 1976, with an emotional departure scene at the conclusion of the serial The Hand of Fear, Sladen later stated in interviews that although she had left Sarah Jane, “Sarah Jane never left me”. Although she declined producer John Nathan-Turner‘s offer to come back as support for the Fourth Doctor’s regeneration (being present at his own arrival at the end of this week’s DVD release Planet of the Spiders), she did returned to the role for the 1981 pilot: having been described by the Doctor as his best friend, Sarah was form her second long-lasting partnership with his “second-best friend” in the titular K9 and Company.

Sladen was re-united with “her” Doctor, Jon Pertwee, in the 1983 20th anniversary celebration The Five Doctors, and again during the 1990s for the two radio stories The Paradise of Death and The Ghosts of N-Space, written and produced by the person who originally cast her, Barry Letts – the two would also be joined by another popular Doctor Who legend in the form of Nicholas Courtney as the Brigadier.

Outside of Doctor Who, Elisabeth continued to work in theatre and television, often alongside her husband Brian; roles included Josie Hall in Take My Wife, a small role in the film Silver Dream Racer, and as Lady Flimnap in a production of Gulliver in Lilliput by her former producer Barry Letts, followed a few years later in his production of Alice in Wonderland as the Cheshire Cat. However, with the birth of her daughter Sadie in 1985, she was to focus more on her family.

However, Sarah would never be far from her life, with the actress continuing to be a popular guest at Doctor Who conventions, and also featuring in a series of audio adventures from Big Finish. Then, in 2005, a discussion with the revived Doctor Who’s head writer and long-term fan of hers, Russell T Davies, led to a guest appearance in the second series adventure School Reunion, which re-united Sarah (and K9!) with the Doctor in his most recent incarnation (David Tennant) – her appearance proved instrumental in cementing the connection between the 20th and 21st Century productions in a way that the Daleks couldn’t!

The character, and Sladen’s performance, proved to be as popular as ever, if not more so, and led to her own starring role in spin-off series, The Sarah Jane Adventures; the CBBC series continued on from her re-introduction in Doctor Who as an independent investigator of alien activity – now joined by her young own assistants as well as her faithful K9 – and winning a whole new legion of fans, both young and old. It is also a testament to the strength of the show that it has been graced by the appearance of the both the Brigadier (Nicholas Courtney), and the Doctor himself in both his Tenth incarnation in The Wedding of Sarah Jane Smith (and David Tennant‘s final performance as the Doctor), and Eleventh in the form of Matt Smith in Death of the Doctor – where Sladen was also to come ‘full circle’ by performing with the actress she ‘replaced’ way back in 1973, Katy Manning, aka Jo Jones né Grant.

The series itself has gone on to win awards, including the Royal Television Society award for Children’s Drama last month.

At the time of her death there are still three stories of The Sarah Jane Adventures to be broadcast on television, and her autobiography, Who’s That Girl is due out later in the year.

Elisabeth Sladen died in the morning of 19th April, having been battling with cancer for some time. She is survived by her husband Brian Miller, and daughter Sadie.

KPSB KEEPS UP WITH THE PULP GOODNESS!

REVENGE OF THE MASKED GHOST
Chapter 19 “Fight For A Ghost”
The action is building to a head as the Masked Ghost’s investigation has lead him to the center of a massive web. Will he survive the night?
http://revengeofthemaskedghost.blogspot.com/

FLYING GLORY AND THE HOUNDS OF GLORY Issue #0  Page 4
“I worked very hard to put that part of my life behind me…” as Elsie and Annie continue to debate over the reunion, another attendee is more than happy to await the big day.
Find out the latest in “Generational Glory” our special issue #0
http://www.flying-glory.com/

CALL FOR WRITERS ON CHALLENGER ANTHOLOGY! 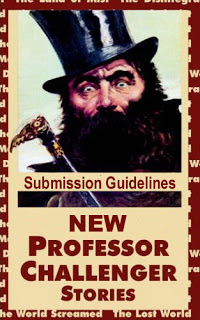 Professor Challenger Anthology Submission Guidelines
Editors: J. R. Campbell and Charles Prepolec
Publisher: EDGE Science Fiction and Fantasy Publishing
Genres: SF, Fantasy, Horror, Steampunk, Adventure
Submission deadline: January 31, 2012
Story Length: Approx. 7, 500 words to a maximum of 10,000 words
What we’re after:
A broad range of new and original stories built around Sir Arthur Conan Doyle’s LOST WORLD character Professor George Edward Challenger. Stories derived from the aftermath of events in the Lost World are welcome, however simply revisiting or rehashing the Lost World without good cause is not. Challenger is a man of science first and foremost, not an explorer. Mash-ups or crossovers with public domain literary characters are welcome.
For inspiration think X-files, Quatermass, Dr. Who, cryptozoology – Yeti, Nessie, etc…, aliens among us, supernatural occurrences, science gone awry in a Dr. Moreau, Invisible Man, Dr. Jekyll vein, nature run amuck, monsters large and small, world threatening cataclysm, Lovecraft mythos, think H.G. Wells, Jules Verne, E. R. Burroughs, John Wyndham, Nigel Kneale, alternate history, new lost places, steampunk, whatever…. Be creative.
Mine the potential for all it’s worth! Push it out there, get weird, play, have fun!
Notes: This is a professional market. Full rate to 7,500 words, half rate for balance to 10,000 words. One time publication rights. The anthology is part invitation and part open submission. Priority will be given to invited authors, but an invitation to submit is not a guarantee of acceptance. A minimum of two slots will be held for open submissions. Acceptance is based entirely on suitability of story and quality of writing. No reprints.
Submission Format:
Email submission in Rich Text Format (.rtf) or Microsoft Word (.doc) attachments only.  Use standard manuscript format. (http://en.wikipedia.org/wiki/Manuscript_format#Basic_manuscript_formatting)
Send submissions to charles@bakerstreetdozen.com and/or themightyjrc@shaw.ca