Reviews from the 86th Floor: Barry Reese takes a look at YESTERYEAR 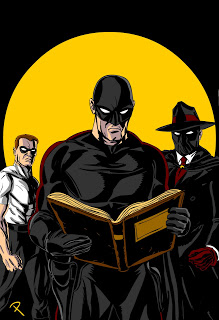 YESTERYEAR
Written by Tommy Hancock
Review based on a preview copy

Tommy Hancock is well known in pulp circles, primarily through his work with Pro Se Productions but also because of his associations with Pulp Ark, All Pulp and just about everything else with “pulp” in the title.

Yesteryear is Tommy’s first foray into novels and it is a superhero piece that straddles the line between traditional pulp and a prose version of a comic book. In that way, it’s somewhat reminiscent of Van Plexico’s SENTINELS series, though th subject matter is quite different. Like Plexico, Hancock wears his inspirations proudly but at no point does this book fall into the realms of parody or pastiche. The characters here have obvious jumping-off points that are recognizable to everyone but from there, they become unique individuals.

The story itself focuses around a long-lost history of the Heroes & Villains movement that began in 1929. Secrets lay within this book and there are people willing to kill to keep them from coming to light. Hancock jumps around throughout the text, alternating between the modern day and pieces of the lost book. This is “world building” at its finest as there are numerous characters introduced, with just enough hint of history to set your mind to wondering… but few of them have their stories told in total. This may frustrate some readers but if you look at it as the first in a series, it’s more understandable. Don’t get me wrong — there is a complete story here, but there are questions left unanswered along the way.

The artwork is nice and adds to the story but the real star here is the prose, which is concise and readable. There are times that I was reminded of both MARVELS (because of the common man’s view of the Heroes) and also of WATCHMEN (because of the conspiracy elements and mystery) — both of those books are classics and Hancock could certainly have done worse than illicit comparisons to them.

I enjoyed it quite a lot and think that if you’re a fan of superheroes, you should really check this out. Both Marvel and DC have tried to move their heroes into the prose realm with limited success but both Plexico and Hancock have shown how it can be done — and done very well.

Yesteryear will be released very soon and in all honesty, I can say that you need to put it on your “must read” list… I have a feeling it will be showing up on many ballots in next year’s Pulp Ark Awards and deservedly so.