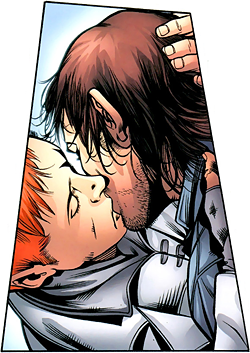 n Saturday night, Peter David won an award from the the Gay and Lesbian Alliance Against Defamation for his work on X-Factor and the portrayal of Rictor and Shatterstar. The Media Award recipients were announced in 25 of this year’s 32 media categories at the 22nd Annual GLAAD Media Awards presented in New York. Other winners included Russell Simmons, Ricky Martin, the HBO drama series True Blood, the NBC comedy , and CNN’s “Anderson Cooper 360″ for its series on gay teen suicides.

We asked Peter for his reaction.

ComicMix: So, first off, congratulations. Do you have an acceptance speech? We took the conductor’s baton away, so you have all the time you want.
Peter A. David: I guess I’d say that we’ve come a long way from when the Comics Code Authority forced DC to remove what the CCA saw as a lesbian kiss in an issue of Justice League Task Force I had written, even though it was a kiss between a woman and a shapeshifted J’onn J’onzz. I’m appreciative of Marvel Comics allowing me so much latitude in X-Factor, particularly Joe Quesada’s unequivocal public support when Rictor and Shatterstar first liplocked.  I note that the award only names me, and I think that’s shortsighted, because there’s been a host of artists and editors along the way who have done a terrific job to bring the stories to the public.  And ultimately I look forward to the day when this award is utterly unnecessary because the positive portrayal of LGBTs is simply so commonplace that it’s no longer newsworthy.  It’s just the normal state of things.

CM: We have the perennial question: so when did you first know that Rictor was gay?  And what was it like coming out to the rest of the comics community?
PAD: It should be noted that I wasn’t the one who established Rictor’s sexuality.  Previous writers had made it so implicit in the character’s subtext that I simply decided not to ignore it anymore.  This is the 21st Century.  We don’t have to do “nudge nudge, wink wink” anymore when it comes to matters of sexual preferences.  In fact, considering what’s going on in schools lately, it’s something that we have an obligation to address directly and honestly.

CM: Of course it was very difficult in some respects. Shatterstar’s “father”, in  particular, didn’t take the news of his coming out well…
PAD: Hey, it’s a free country and, as the guy most identified with Shatterstar, he certainly has a right to express his opinion about it.  I respect that.  Obviously we’re seeing it from different perspectives.

CM: Have they experienced discrimination at work?
PAD: You mean has there been negative response by people at Marvel to the developments?  No.  Not at all.  It’s honestly no big deal; indeed, the general reaction by readers has been disproportionate to the Marvel reaction.  Fans discussed and disputed it all over the blogosphere, but when I incorporated the characters’ sexuality into the book, there was nary a ripple at editorial.

CM: It’s coming up on the two year anniversary of the kiss between Rictor and Shatterstar. Traditionally, that  means cotton. What should we get for them?
PAD: Weapons.  Weapons are always nice.