MOONSTONE MONDAY-SPECIAL CLIFFHANGER FICTION!!!
Usually Moonstone Monday and ALL PULP give you previously published stories from MOONSTONE in CLIFFHANGER FICTION!  This week, though, we share with you a COMPLETE tale from the upcoming MOONSTONE anthology MORE TALES OF ZORRO!  This story, and the others featured in the collection, star that sword wielding masked hero of California and the Early West!  And remember, go to http://www.moonstonebooks.com/ when the book debuts in the next 2-4 weeks and order your copy as soon as its available!  And pick up the first MOONSTONE collection of Zorro tales while you wait! 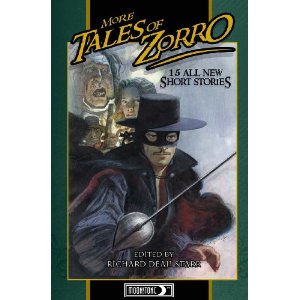