There was a lot of cool stuff to see at Toy Fair 2011, and unfortunately there wasn’t enough time to see everything. I made a point of asking the nice people at Lego for info on some of their goodies, and they were very forthcoming. If you’ve ever picked up a Kubrick figure, you know that part of the fun is the mystery of not knowing what figure you’re getting in the box. Lego builds upon this with their third wave of minifigures.

For about the same price as a comic book (or less actually), you get a minifigure with accessories in a mystery bag. You’re never sure what you’re gonna get, and as a collectible, these figures have a lot of potential. One of Lego’s geek crown jewels is their Millennium Falcon, and they build upon a rich history of “Star Wars” with Clone Troopers, 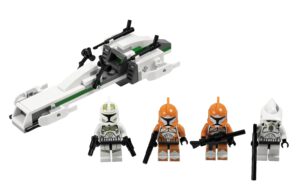 and a Bounty Hunter Assault Gunship.

The potential for having fun with Lego has always been staggering given the vast room for creativity. 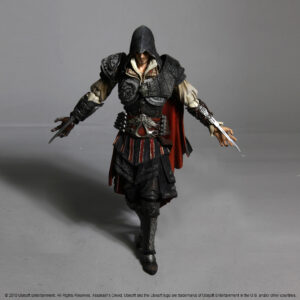 Square Enix has a grand reputation for creating some of the best video games since kids first got “Nintendo Thumbs.” They’ve expanded with their “Play Arts Kai” line of collectible action figures from different publishers. They’ve done great stuff with “Halo” and of course their own “Final Fantasy” titles, but they’ve created stunning figures like “Ezio” from Ubisoft’s “Assassin’s Creed” series, “Solid Snake” from Konami’s “Metal Gear Solid” series,

And this massive prototype of “Ryu” from Capcom’s “Street Fighter IV.”

To the right, is a prototype of “Chun-Li.” The quality and detail of the sculpting was stunning.

In my humble opinion, the absolutely coolest thing at Toy Fair was probably one of the most unassuming. I’ve been to Toy Fair numerous times before, and I’ve seen some trends copied and driven into the ground, but the “My Keepon” robot is unique.

It was originally created to study social development and as a telepresence tool for autism therapy, and what’s not to love about a little squishy robot that watches what you do, dances, and reacts when you tickle it? I had to tear myself away from the booth. It was a thrill to actually play with one, and I can’t wait to have one of my very own.