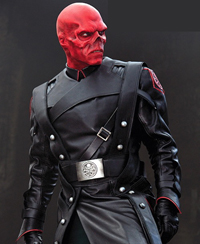 Loyal and even semi-conscious comics fans know that Captain America’s arch-nemesis (love that phrase) the Red Skull was a big-time Nazi in the 1940s. The next decade, he was a Commie, proving you don’t have to be a Republican to conflate the two extreme opposites. In the 1960s – and ever since – he’s worked with (more or less) lots of organizations but was always in it for himself.

The movie Red Skull is a bit more confusing.

Entertainment Weekly released the above photo of Hugo Weaving as the Red Skull (a.k.a. Johann Schmidt) in this summer’s Captain America: The First Avenger, an origin story largely set in World War II. But if you take a close look at that belt buckle he’s wearing, it appears that at some point in the movie Skully gets… Hydrated. 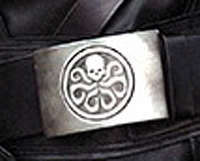 Unless the shot is actually from the 2012 Avengers movie.