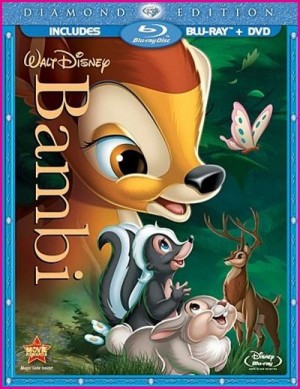 Walt Disney was a genius on many levels but one that doesn’t get talked about often enough was his way of directly reaching children in gentle and moving ways. He emphasized strong stories and inventive characters, letting the animation style and music convey the emotions. From the title sequence to the first song, “[[[April Shower]]]”, you are transported into the world of [[[Bambi]]]. The latest in Walt Disney Home Entertainment’s long line of high definition restorations, [[[Bambi Diamond Edition]]] is out this week and automatically goes on the Must Have list.

I don’t remember seeing this as a kid, but watching it twice through my children’s’ eyes made this message work across then generations. I’ll tell you upfront that the Blu-ray edition is gorgeous to watch and listen to. Thanks to the patented multi-plane process, the subtle colors and painterly approach to the forest and its denizens have never looked better. Given its emotional wallop about halfway through, it makes sense that the story feels simple but is actually streamlined.

Once we meet Bambi and his mother, we move into the deer’s world. That’s when the cartoony look arrives with the arrival of Thumper. Despite his talkativeness, there are long silent stretches where the score and beautiful scenery get to shine. The flora and fauna are detailed enough to feel real without overwhelming the animals inhabiting the land.  Thumper, the owl, and Flower the skunk are some of the best animals Disney’s Nine Old Men created because they studied the real things as well as young children, finding commonalities that can be used to entrance the young audience.

And when Bambi’s mother dies, the loud crack of the rifle remains one of the most riveting sounds in all cinema. The unseen enemy, man, is not condemned but accepted as one of life’s dangers. As Bambi’s father arrives to take responsibility, he stands majestic, his place in the animal hierarchy secure. Bambi has to grow up sooner than most of his peers but does so and the transition from child to teen to adult is one of the stronger threads holding the film together. 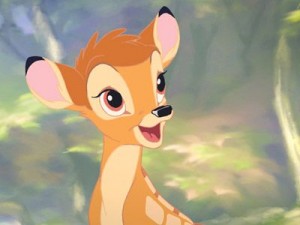 The last edition came out six years ago and all those special features are brought over to this new edition. The main menu will offer the viewer suggested bonus features in sequence and there’s a separate menu for the features. The new to disc extras cement the need to own this film. You get storyboards for two deleted scenes beyond the two from the classic section. There’s also a demo track for a deleted song, “Twitterpated,” which has its charm.  There’s [[[Disney Big Book of Knowledge]]] which has an interactive set-up for younger viewers and the Blu-ray technology provides a way to save and record activities until they are completed. Older fans will appreciate the interactive art gallery and you should browse all five sections.

The most inventive aspect of the bonus features requires you to download an app so you can try out the new Disney Second Screen. Not having such a smart phone or tablet computer or laptop with Blu-ray technology, I was unable to sample this but those who activate the app; you will get additional content such as games.  The Disney press release boasts: “This groundbreaking new application allows users to interact with their  Blu-ray™ player by simply starting the Blu-ray movie, and then syncing  Disney Second Screen to the film automatically by following the easy on-screen instructions.  Once connected, they can explore interactive galleries, play games, and learn interesting facts about the scenes they’re watching.”

The movie’s charm and memorable characters endures, making this a true diamond for your library.