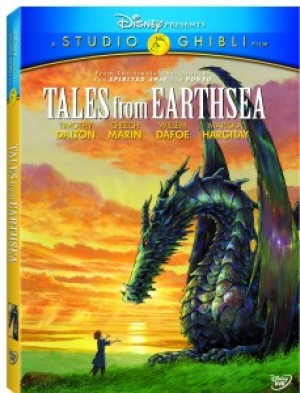 I first visited Ursula K. LeGuin’s Earthsea series in my Fantasy Literature college course. Her books were short and eloquent, wonderfully transporting me to another place and time. The strength of her work is that is has endured through the years and inspired others. In 2006, Japan’s Studio Ghibli ([[[Princess Mononoke]]]) released their animated adaptation, [[[Tales from Earthsea]]], and it stealthily came to the United States last August via Walt Disney Pictures. Opening so late in the summer season hurt it at the box office, so it is welcome that the DVD release is finally here this week.

The movie doesn’t adapt any one novel but takes elements from the first four books in the series: [[[A Wizard of Earthsea]]],[[[ The Tombs of Atuan]]],[[[ The Farthest Shore]]], and [[[Tehanu]]]. With LeGuin’s blessing, the movie told a relatively new story about Earthsea filled with omens, sorcery, deception, destiny, and a love for the land. To be honest, it’s been so long that I couldn’t recall the source material and was treating the story as something entirely new. Apparently, LeGuin herself was less than thrilled and fans of the books were split.

To be sure, there are dragons, sorcerers, Kings, common folk and Arren, the sword-wielding youth who becomes the focal point of the tale. As he ventures into the countryside, Arren is joined by Sparrowhawk the Archmage, and together they take refuge at the home of Tenar, who is an old friend of the Archmage and caretaker to the young Therru, who has just been rescued by the men.

The land is suffering from drought with the Archmage explaining that the Balance is out of alignment and things need to be set right. Trying to take advantage of this looming disaster is the vile Lord Cob, who does everything he can to stop Sparrowhawk and control Arren. The young man, though, just wants Therru to like him. There’s a lot more but truly, you want to immerse yourself in this rich tale. Be warned, though, while the characters have the same names, their roles and personalities vary wildly from LeGuin’s prose and you have to remember, this is “inspired” by the books and is not to be considered an adaptation at all.

Unlike many American hand-drawn animated features that barely run 90 minutes and tend towards a simplified look, Studio Ghibli gives us a 115 minute trip to Earthsea and makes it a rich experience. The scenes are dense with color and detail and the characters have strong, distinctive looks. The English vocal cast is headed by Timothy Dalton as Sparrowhawk, accompanied by Willem Dafoe opposing him as Cob.  Also in the cast are Mariska Hargitay, Matt Levin, Cheech Marin, Blaire Restaneo, and Jean Smart – none of whom overwhelm the animation by sounding too familiar.

The standard DVD comes with just a few extras, geared to younger viewers. There’s a bit on Behind the Studio which more about the animated film than the books; Enter the Lands, which is an interactive tour through Ghibli Studios. Finally, there’s a brief Studio Ghibli Trivia Challenge.