I wanted to show off some of the other cool Minimates that Diamond Comics Distributors had at their booth, but as is often the case with trade shows, photos were not permitted yet.

Something of note at JAKKS Pacific was a considerable line of goodies from the Dreamworks movie, “Real Steel.” 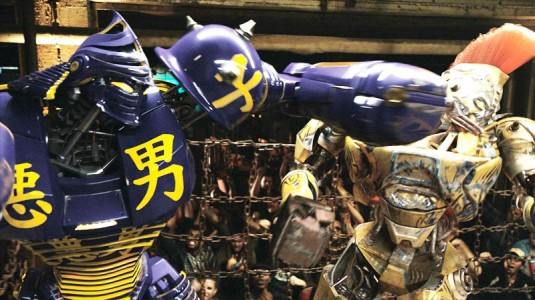 A 5″ line of figures will have interchangeable limbs and light up heads & bodies for customization. A larger 7.5″ line will have signature moves from the movie, but there’s gonna be something even more dear to the hearts of a lot of geeks – a variation (and a necessary one at that) on the childhood favorite, “Rock’em Sock’em Robots” (note to younger readers: ask your folks about this. It’s really cool. trust me).

DC Direct had some very well made busts & figures from the upcoming “Green Lantern” movie: 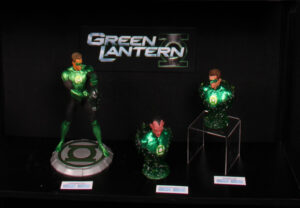 But the thing I was most looking forward to was goodies to “Batman: Arkham City,” the video game sequel to the 2009 hit game “Batman: Arkham Asylum.” So far, only one figure had been shown off, and it’s a doozy.

Harley Quinn keeps getting nuttier and nuttier. And that’s a good thing.

Mezco Toyz showed off a 6″ Scott Pilgrim figure from the movie and fan fave graphic novel series. Hopefully more figures will be coming.

McFarlane Toys never fails to impress, and they had a couple of great highlights including this guy 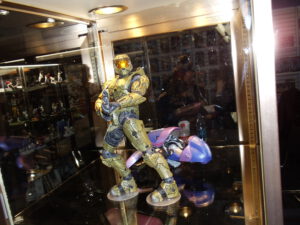 Now Bungie may have left Microsoft, but that does not mean that “Halo” is dead. Far from it. More video games are being planned, and one can only hope that a movie might actually happen.

McFarlane Toys also had shown off figures from “The Walking Dead.” Take a look at these two guys.

Now note that “Officer Rick Grimes” doesn’t look like Andrew Lincoln, the actor who portrays him in the AMC TV series. There’s a reason for that. McFarlane Toys’ goodies for “The Walking Dead” is both for the Robert Kirkman graphic novel series as well as for the AMC TV series. This can create some issues as one of the figures in the first wave “may” actually appear in the 2nd season of the TV series (“Daryl Dixon,” everybody’s favorite crossbow-wielding hillbilly, will be in the second wave of action figures).

That’s it for now. In the third part, I’ll talk about some of the stuff I was unable to see as well as what I consider to be the coolest toy at Toy Fair 2011.