Johnny Depp and the Marvel Universe 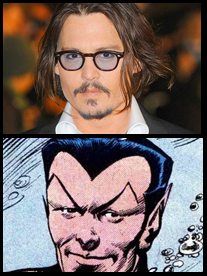 Did you ever wonder who might be Johnny Depp’s favorite super-hero? Probably not, but I’ll bet you can figure it out.

Yep. You guessed it. Johnny Depp’s favorite super-hero is Prince Namor, the Sub-Mariner. Of course, Namor isn’t quite a super-hero, having been bridging the gap between hero and menace for 71 years. Which is why I’m not surprised he’s Depp’s favorite.

Now, let’s not go nuts here. Depp is not suggesting he’s going to play Namor in the Avengers movie or some other place, and he’s not even suggesting wants to play the part. Right now he’s in the middle of at least four movies, including the fourth Pirates of the Caribbean and the new Dark Shadows movie, where he plays Barnabas Collins.

Depp was a real Marvel Comics fan, showing preference for both Spider-Man and the Fantastic Four… although he didn’t care for Captain America, and this was long before we ever heard of Al Qaeda. Depp also liked Sgt. Rock.  Depp told Hero Complex “The Sub-Mariner was the alternative one. The alt-superhero. He was the sort of Bohemian comic book. I like that.”

I know I said there was no movie involved, but if Depp were to give Subbie a go, maybe they could get Joaquin Phoenix to play the Human Torch.