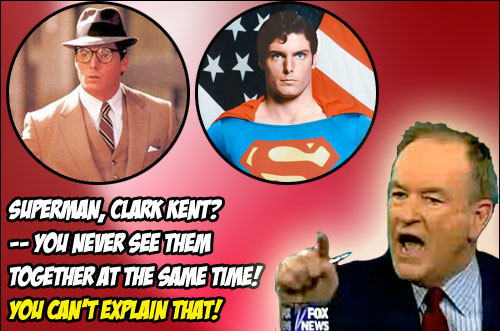 So, not so long ago, the American Atheist Group decided to buy a few billboards. So their president, one David Silverman, wanted to perhaps start a national debate on religion. Good idea? Well, we’ll leave that one up to the Lord (be it Allah, Ganesha, Buddha, Yahweh, Inky the Magical Leprechaun, or Stan Lee if you prefer). Billboards go up, and guess who get his panties in a bind? The answer rhymes with Shrill O’Bile-ly. Cut quickly to the O’Reilly Factor where Silverman was interviewed. And here’s where things get spicy.

During the interview, the debate whether the word “scam” is offensive is debated. And then the big guns get fired. Once Silverman dares to call organized religion “mythical”, Billy goes on the attack. “Let’s just be two guys. Not an atheist and a catholic. Just two guys…” O’Reilly throws out. Get this folks: The Tides. “They come in, and go out. Come in, and go out.” And why? According to O’Reilly… “It just happens. You can’t explain that.” Silverman, who didn’t have his high school physics book handy, forgot to PWN Bill by explaining tides move according to the gravity pull of Earth’s moon. He attempted a sidestep by saying “it doesn’t matter” that he couldn’t explain it, because at the root of his argument… explaining anything by way of an invisible man in the sky is silly. But Bill was Bill. He’d have nothing of it.

Enter the Internet. Now it’s become its own meme-in-the-making. So, ComicMixers… let’s discuss… what is there out in PopCultureLand that also can’t be explained by anything else than the mighty G-O-D? Consider this a contest folks. Use this meme-maker and post it in the comments below. Funniest meme gets a piece of the holy cross. Or a radioactive spider. Or the mighty Mjolnir. We’re not sure yet.