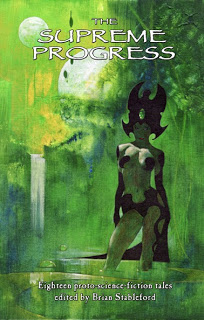 “THE SUPREME PROGRESS is another anthology of eighteen 19th century French proto-SF stories (following NEWS FROM THE MOON and THE GERMANS ON VENUS) by Brian Stableford. I’ll single out two as singularly ground-breaking: Charles Cros’ An Interastral Drama (1872), about an unlawful love between an Earthman and a Venusian woman, and Eugène Mouton’s The End of the World (1872), depicting an ecocatastrophe precipitated by global warming generated by human industrial activity. The cover is by Mike Hoffman. 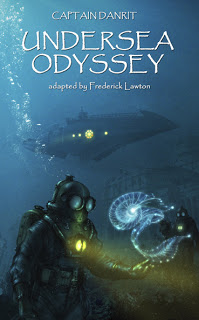 UNDERSEA ODYSSEY is a suspenseful 1907 techno-thriller about a crew trapped in a sunken submarine at the bottom of the Mediterranean Sea, by Captain Danrit, a French war hero (he died at Verdun) and the #1 author of militaristic, near-futuristic thrillers of his time. The cover is by Meinert Hansen. 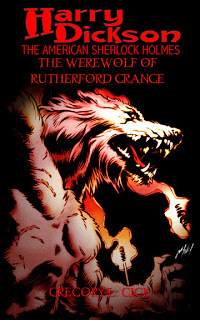 Finally, HARRY DICKSON AND THE WEREWOLF OF RUTHERFORD GRANGE not only reprints G.L. Gick’s (revised) story of Tales of the Shadowmen 1 & 2, but includes four more stories by Gick (two never published before) and an original Harry Dickson tale as well. The cover is by Matt Haley.” 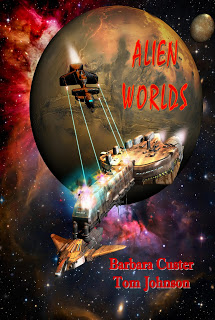 Barbara Custer and Tom Johnson team up to explore the possibilities of intergalactic adventure. The action and suspense in these stories will keep you turning the pages. Does intelligent life exist on other worlds? Some people believe that God didn’t create the vast universe just for humans. Are they gentle friendly beings, or are they monsters that prey on weaker species?
Custer explores heroic aliens bent on rescuing the human race, and evil aliens intending to destroy it. Humans will be in the crossfire! Brothers will also be at odds in their desire to save or destroy mankind.
Johnson gives us two views of the galactic frontier, with his Captain Danger, a superman of the future who keeps law and order among the spaceways, and a master thief, who operates as a future Robin Hood of the star systems.
Together, Custer & Johnson present their fantastic tales of SF in the first of several anthologies from NTD.
Now Available From NTD www.bloodredshadow.com/ Will be available on Amazon and Kindle, and other Major Outlets soon.
Share