﻿Pro Se Productions announced today that yet another talented writer, creator, and editor in the Pulp field has joined the Pro Se staff.   Pro Se recently announced the promotion of one of its magazine line editors, Barry Reese, to position of Submissions Editor.  This left a vacancy as far as Line Editor for the MASKED GUN MYSTERY magazine imprint.  Until now. 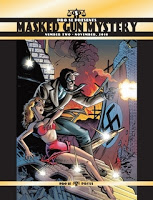 Pro Se Productions Editor in Chief Tommy Hancock announced today that writer/creator Frank Schildiner will be the Line Editor for PRO SE PRESENTS MASKED GUN MYSTERY as of today. Schildiner is a Pulp writer with several solid credits to his name, including stories for Airship 27 Productions in various volumes, such as the recently released RAVENWOOD, STEPSON OF MYSTERY, as well as past volumes of SECRET AGENT X and THE BLACK BAT.  Schildiner has also penned stories based on Jean Kariven for volumes of TALES OF THE SHADOWMEN from Black Coat Press.    Schildiner’s latest story, a character of his own creation entitled LEE COHEN, MONSTER MOBSTER debuts in MASKED GUN MYSTERY #3 in February from Pro Se Productions.

When asked about his new position and his plans for the Imprint, Schildiner said, “My first thought was this was a huge honor. Editing a pulp magazine is a dream come true, even if it is a daunting task. As to the future, I’m looking forward to finding and promoting all new pulp heroes from current writers and continuing the pulp explosion that’s happned the last few years.”
Check out Pro Se Productions at http://www.pulpmachine.blogspot.com/
Share