Michael Moorcock To Be Defeated 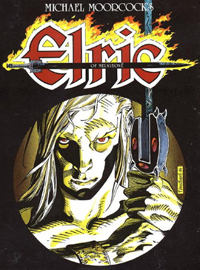 Considering he’s about to lose a leg, author Michael Moorcock certainly is in good spirits.

The creator of Elric, Hawkmoon, Count Brass, and Jerry Cornelius, the author of such award-winning books as Behold The Man and Gloriana, singer/songwriter for Hawkwind and the Heavy Metal movie, former editor of the British Tarzan comics, screenwriter of The Land That Time Forgot, and, by the way, author of the latest Doctor Who novel, Michael Moorcock is facing the amputation of a leg. As he stated on his blog: “I apologize for being a bad correspondent with many over the last couple of months. All efforts to save my wounded foot without resort to surgery have been made and now, somewhat inconveniently, I’m seeing a surgeon tomorrow (Monday) re. amputation. Shouldn’t be too serious, though, as I said somewhere, I feel a bit fed up with constantly supplying Mrs Lovett for tidbits for her bloody pies… I AM a little nervous but it’s mostly to do with more things going wrong (caused by medical staff) than anything else.”

As our pal Rich Johnston notes at his Bleeding Cool site: “Michael seems to be taking this, as much as everything in his life, with good humour, if a touch on the gallows’ side. All at Bleeding Cool wish him well tomorrow and in the days to come.” We’ll toss in the staff and friends of ComicMix as well, Rich.

As a Moorcock fan of 40 years standing, I’m not the least bit surprised about his attitude. The man virtually invented steampunk, the man who virtually invented the “grim and gritty” hero (Elric; and I should know, having coined the term for GrimJack), the British Jew who moved to Texas and espoused radical thought, and cosmic rocker extraordinaire, the 70 year-old writer is expected to make a complete recovers… except for one of those legs of his.

Hey, look. At least it’s not one of his arms. Take care, Michael.