Doctor Who To Wed Daughter! 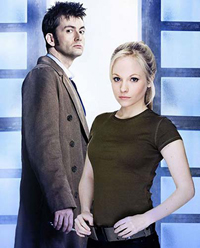 It turns out there’s a second
way for a Time Lord to regenerate.

David Tennant, who played the lead in Doctor Who for five years, is engaged to actor Georgia Moffett, who played Jenny, the Doctor’s sort-of daughter, in the hit teevee series. Yes indeedy, Tennant played her “father” in that episode, The Doctor’s Daughter.

So who’s her father?

The fifth Doctor Who Doctor, Peter Davison. Who– er, rather, Davison– also appeared with Tennant, each playing their respective Doctor, in the 2007 Children In Need Special, Time Crash, which you can see here…

Wow. This is getting kind of kinky, isn’t it? M.C. Escher couldn’t map out the trans-dimensional relationships here. I think there’s a fine line between regeneration and incest – even in the fictional worlds of the Doctor.

According to Great Britain’s paper The Sun, Tennant and Moffett are going to marry on this coming New Year’s Day. But the important question is, will Ms. Moffett ever return to the show as the Doctor’s daughter?

By the way, Alex Kingston, the Doctor’s other daughter –or is she his wife, or maybe his mother? – will be guesting on Craig Ferguson’s Late, Late Show this Thursday, January 6. This show will also feature the previously banned (and well-YouTubed) Doctor Who musical opening featuring the current lead, Matt Smith.