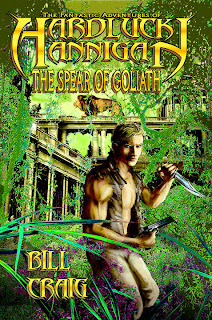 When I read pulp, I’m not simply reading as a reviewer. First and foremost, I’m a lifetime fan of the field and thoroughly enjoy pulp. Especially when that pulp centers around a well defined, multilayered, two fisted protagonist that I can get behind and want to stand alongside of.

Hardluck Hannigan is that type of hero.

SPEAR OF GOLIATH is the sixth adventure of Hardluck Hannigan written by Bill Craig. It is also the only novel I have read of the series, so bear that in mind. In this tale, Hannigan, just off of his most recent adventure and having turned away from two women in his life, finds himself in Africa and, after saving Musio, a Chinese woman who also owns a bar, Hannigan and a team of new and old allies end up racing to find the fabled Spear of Goliath, brought to Africa after the giant’s death. I say racing because there are several people pursuing Hannigan and/or the Spear, including Nazis, citizens of a lost city, and monster men from mineral mines! Yup, I said it.

This book is rich and vibrant with character. Hannigan is definitely cast in the pulp adventure mode as is most of the friends and enemies Craig sprinkles around him. He’s also complex, not simply relying on his fists or wild ideas to get through the day. He has worries, concerns, even self doubt and these play so well into his motivations, into what makes him a hero, that they aren’t weaknesses, but strengths of a different sort. Craig pours heart and soul into the lead as well as the cast around him.

Craig also paints the surroundings well. Whether or not its on the beach, in the bar, in a jeep, or in the opulent lost city, the reader feels as if they are there. Craig’s use of phrases and description make it very easy to imagine the ruins of the city being stalked by a lion or tribes of natives attacking Hannigan from one side with Nazis on the other. Craig’s handle on both his characters and his settings is top notch.  The fantastic cover by Laura Givens only adds to the level of beauty that Craig generates in his descriptions.

SPEAR OF GOLIATH starts off extremetly well. The introduction to Hannigan’s new situation, the way that characters are brought in and explained well, but not overdone, and the pacing of the action is all very tight and dead on. Unfortunately, that tightness, the control of plot and action and flow seems to almost disappear later in the book. I noticed this quite significantly when the plot concerning citizens of the lost city came into play. One instance concerned the origins of Goliath’s birth. Not wanting to spoil anything, Craig identified Goliath’s parentage and unless the timeline we understand from Biblical studies has been altered by Craig, his proposed heritage for Goliath doesn’t click. Also, it seems that Craig is trying to juggle too many dangling plotlines toward the end of the book and although issues are resolved, said resolutions are not as satisfying as they could have been if possibly less attention was paid to throwing in several mini plots and more was given to keeping the primary ones introduced early on flowing and tight. I was particularly intrigued by the build up of the Nazis and the mercenary for hire working for them, but was somewhat disappointed in how that particular line was tied up.

Even with that, HARDLUCK HANNIGAN: THE SPEAR OF GOLIATH is a fun read and totally engaged me with its descriptions and its exciting, colorful characters. I will definitely read the other books in the series simply to be able to ride along with Hannigan and crew a few more times.

THREE OUT OF FIVE TIPS OF HANCOCK’S HAT-An enjoyable read, one definitely worth adding to your collection.