NINE FOR THE NEW-Interview with Ken Janssens!!

NINE FOR THE NEW (New Creator Spotlight)
KEN JANSSENS.-Writer/Creator
AP: Ken, welcome to ALL PULP! First, can you tell us about yourself, some personal background? 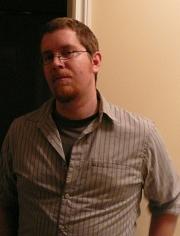 KJ: Well, I’ve been writing for almost two decades in some capacity or another. Though I had a little success, I didn’t really start to break out until the last year or so. I’ve lived my whole life in Winnipeg, Manitoba, Canada and think it’s one of the best places on the planet… when it’s not February and in the middle of a minus thirty-five degree cold snap. But, hey, I’m a Canadian. We’re a hardy stock.
AP: As a writer, what influences have affected your style and interests the most over the years? Do you have a particular genre/type of story you prefer to write?
KJ: My influences come mostly from my childhood. For some reason, I became attached to the “noir” type fare that I came across and have been infatuated with that stuff since. In those days, it was the original Scooby Doo mysteries cartoon and the Three Investigators novels as well as Sherlock Holmes and Jack the Ripper. I love 1880s London and it has the biggest pull for me of any time period. So, from all that, one can gather that I love mysteries and down-to-earth horror stories (or at least stories of a cryptozoological bent).
AP: What about genres that make you uncomfortable? What areas within pulp are a little bit intimidating for you as an author?
KJ: I don’t know if any make me uncomfortable but I will say that I’m not much for space adventure stories. There are, of course, exceptions. I’m a fan of the original Star Wars trilogy and the first two Alien movies, but other than that, they aren’t really my thing. Now that I’ve said that, though, I am planning to write a moon-based story for Pro Se Presents. But like any story of a supernatural or sci-fi nature, I will bring it down to earth (no pun intended, honest). To tease it I’ll say it has to do with a road construction worker on the terra-formed moon who happens across a terrorist plot. I like when fantastic topics are provided as the spice of a story, not the stew.
AP: Are you a pulp fan? If so, how has that affected you as a writer of pulps. If you aren’t a longtime fan, then why pulp?
KJ: I am a pulp fan by proxy. I have been a fan of detective comic books my entire life, which would be nowhere without the pulps of the 1920s and 30s. I am tangentially aware of most of the popular pulp characters through my love of the history of all media and am a Philip Marlowe fan. If I was born a half-century earlier, I’m sure I would have been totally into the pulps since they are the embodiment of the “noir” and detective facets that I love.
AP: What do you think you bring to pulp fiction as a writer?
KJ: That’s a tough one. Besides my love of “noir” that I’ve referenced earlier, it would just be my sensibilities as a writer. The human element always comes first with me. I think that helps make my pulp stories relatable and hopefully somewhat absorbing reads.
AP: You’re a staff writer at Pro Se Productions and you may be the king of serial characters there. Tell us about Sherringford Bell.
KJ: The Sherringford Bell stories are sort of my modern day take on Sherlock Holmes if he tracked down the demonically-possessed. Sherringford is an ex-FBI forensic psychologist who resides on the miserable and condescending side of life. Along with Nigerian priest Paul Anyogu, who acts as the Watson narrator type for the stories as well as the exorcist on their adventures, Sherringford uses his superior intellect and insight into the human mind in Washington D.C. to do what others can’t. The series often delves into government programs and the lives of political figures as its local dictates.
AP: Now, onto another series at Pro Se. Moving from the supernatural to the adventure serial. Who are the Cerberus Clan?
KJ: The Cerberus Clan is about a family in the 1930s who lose the patriarch of the family and decide to venture to the African Serengeti to learn about his roots. Once there, through some traumatic events, Kate and her two sons become the guardians of a long cave called the Gateway. Though they don’t know to where the cave leads, they do know one thing: their new job is to not let anyone in and not to let anything out. The “anything” of the previous statement seems to be what might be considered monsters. What I really like about the Cerberus Clan is each story appears to give the reader a vague answer to what is at the other end of the cave’s tunnel. The first tale hints that it is Hell but the second one gives a decidely different viewpoint. I know what the real story is behind the Gateway but, of course, that won’t be revealed for a few more stories. Yeah, I’m such an a$$.
AP: And lastly, but definitely not least, let’s talk about the character that was the first story most saw from you at Pro Se.  Tell us about the wonderfully crafted Aloha McCoy.

KJ: Aloha McCoy is the closest character that I have to the old hardboiled crime detectives like Philip Marlowe and Sam Spade. She doesn’t like many people and never backs down from a confrontation, no matter how outmatched she is. Aloha is a Hawaiian/Irish ex-gymnast who now runs a youth recreation center. Because of financial difficulties and a twist of fate, she has started to take on private detective cases, even though she is not that good at the whole thing. It is more her perseverance and moxy that get her through the adventure. Aloha, along with her brother Kam—a sumo wrestler-sized party entertainer, lives in “The City” just outside “The Core”. The Core is an Irish-dominated neighborhood that they grew up in and is the most dangerous part of the city. Every case brings them back to this neighborhood to Kam’s dismay and Aloha’s gradual intrigue.
AP: ALL PULP assumes your series at Pro Se will continue, but are there any other projects you want to discuss?
KJ:  Also at Pro Se, my comic book mini-series (which I believe will be serialized in the pages of Pro Se Presents) titled “Caleb Elsewhere” will be out in the future. It is about a disgraced cop who is begrudgingly brought back to assist his son in recapturing a serial killer he had put away over twenty years ago. The obstacles that line up against him are his ex-partner, who hates him and is now the police chief, and his son’s belief in Caleb’s “abilities”.
Anyone that wants to read another of my pulp stories can find it in the anthology book “Pulp Empire, Volume 2” It’s a one-off about a petty criminal that has to make a choice while he is caught in a life-threatening scenario.
A few of my other ventures include a couple comic book proposals to companies as well as two television proposals, one to American television and one to Canadian television. Keep your fingers crossed for me, folks.
AP: Ken, thanks for stepping away from the computer for a few minutes to visit with ALL PULP!
KJ: Always a pleasure. Keep up the good work, All Pulp. We need a site like yours to spread the word about the great pulp fiction out there.
Share