All Pulp’s Frank Fradella-Writer/Editor/Artist/Publisher
AP: Tell us a little about yourself and your pulp interests. 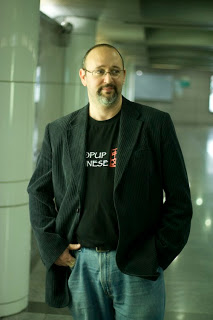 FF: I actually started out wanting to be an artist. No kidding. I wanted to do the covers for pulp novels. I grew up on Long Island, in a little town called Hauppauge, about two blocks away from renowned fantasy artist, Ken Kelly. One day, when I was 12-years old, Ken opened his door to me and a friend and took us on a tour of his studio. There was a half-finished oil painting on the easel, original art on the walls, sketches on pads and the smell of what I have come to know as “art in the making.” There’s a distinct scent given off by the meeting of paper and eraser and it was there in that studio, along with the lingering smell of paint and turpentine. I was hooked.
AP: What does pulp mean to you?
FF: Man… there’s no short answer for that one. Pulp is the heartland for nearly every great adventure character ever written. Tarzan, Conan, the Phantom, Doc Savage, John Carter… even those who came after like Indiana Jones are staying true to the core of all pulp stories. Pulp is not high literature. It is the literature of the masses. It grew out of an era when there wasn’t a television in every home and they couldn’t churn out those books fast enough. The greatest pulp written now is blissfully relegated to that same era. It’s the best kind of time machine. There’s a certain optimism to those stories that I really love.
AP: iHero Entertainment recently released the first issue of the new I, Hero magazine. What can readers expect from the new I, Hero? How many issues will be published each year?
FF: We’ll be publishing monthly, so our readers can look forward to 12 issues this year. And that’s all they can expect. Because if iHero does anything well, it’s defy expectations. I think we’re a hard animal to describe. We’re not a comic book. We’re not solely a literary magazine. We’re the best of both worlds. That distinction seems hard to grasp for most people until they see their first issue and then it’s always, “Ohhhhhhhh. COOL!” The long and the short of it is that we tell stories about people. They just happen to be people with superpowers.
AP: I, Hero is available as an ebook as well as in traditional print. There has been a lot of debate in recent years regarding print vs. Digital books. Do you have a preference for one type or the other? Do they have to be at odds or can both mediums coexist peacefully?
FF: There’s no doubt that there are traditionalists out there who love the tactile experience of reading a paper book or magazine, but there’s something so immediately gratifying about the digital download you can buy and read anywhere. I never thought I’d get used to reading on a hand-held device, but I downloaded the iBooks app for my iPhone and I’m a believer. You just can’t beat that kind of portability. Things like the Kindle and the iPad are game-changers. With the new “I, Hero” magazine, we’ve really worked hard to make each issue a satisfying experience no matter which format you choose. 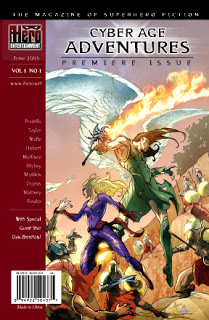 AP: Where do you (or would you) like to see the publishing industry in the next five years?
FF: I’d like to see the landscape continue to change for the independent publisher. There’s some really good work out there, and with today’s technology (like print-on-demand), it’s easier than ever to get your work into print. It’s also harder than ever to get people to see that work. It’s a huge help that there are social networking sites to help you gain an audience, but you’re also fighting for their attention with about 16 billion ads, games, pokes and blogs. I’m seeing too many big box chains suffer and go under, but it does leave room for the little guy who has far less overhead. Sometimes a thing gets too big and it grows unwieldy. It collapses under its own weight. A smart indie publisher can fill that void with the right product. We’re hoping to be that publisher, or at least one of them.
AP: You’re best known for your work on short prose tales for iHero and Cyber Age Adventures. What draws you to these shorter stories and can we expect to see more coming? 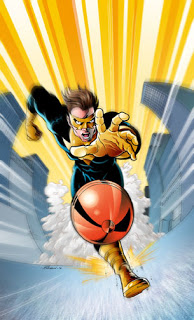 FF: I cut my teeth on short stories. That will always be home for me. Not everything has to be Doctor Zhivago. I like the brief power of a good short. It’s tight, it’s focused. It’s a writer having just one thing to say and showing up to say it. A novel can have A stories and B stories. There are sub-plots, a zillion characters, pages of exposition, and so help me… maps. I see so many books with maps on the first page. I get daunted by things like that. Seriously? Your writing is going to be so convoluted and long-winded you had to draw me a map?! My favorite part about the stories in the iHero universe is that they’re always relate-able. We’re often writing about people who can outrun bullets or fly or punch through mountains, but we always tell those stories from the human perspective.
AP: You’ve also written novels, Swan Song, Valley of Shadows, and The Absent Lover. Tell us a bit about your novels, please. Are they still available?
FF: They are still available! You can find all of my books on Amazon, and Swan Song is also available on our site at http://www.ihero.net/. 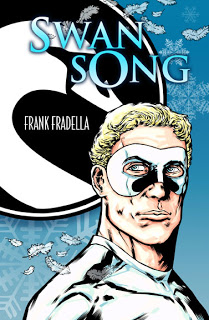 Novels are, for me, a very different beast. You can’t just write a book because you want to see your name on the cover. You’ve got to have something to say that can only be told in that format. That’s my guiding star for everything. I write until the story is done. I’m not aiming for a page count or trying to fill to make my novella a full-length novel. That’s not fair to the reader. With each of my novels, I’ve written stories that have a certain breadth and depth to them. They needed the longer format to tell the story well. What they didn’t need was maps.
AP: What came first for you, writing short stories or novels and how did one influence the other?
FF: I started writing short stories first, and I think that was an important introduction to the craft. My college professor told me, “There isn’t a novel in the world that can’t be told as a short story. And there’s not a short story that can’t be summed up in a single sentence.” I’ve always liked that. When I went on to write screenplays, I understood the importance of the logline (the one-sentence description you use to pitch studios), and now I don’t sit down to write a story of any length without being able to tell you what it’s about in just one sentence. Because if I can’t tell you what the heart of the story is in a sentence… I probably don’t know. And that’s not good.
When I do sit down to write a novel, I have that sentence sitting there to guide me. I make sure that every plot twist and character conflict brings me closer to making that statement true. Then I do the same on a smaller scale for each chapter. Generally speaking, I know how every book starts and ends, and everything in the middle takes on the same process as a short story. 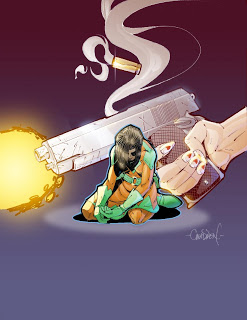 AP: What, if any, existing pulp or comic book characters would you like to try your hand at writing?
FF: I’ve got a pulp character of my own that appeared in an anthology a few years ago and she’s been beating me about the brain pan to write her book. Aside from her, I’d just about kill to write a Conan or Phantom novel. And of course, that Lance Star guy is pretty cool, too!
AP: Who are some of your creative influences?
FF: Robert B. Parker is a big one for me. He taught me dialogue. Chris Claremont, for his group dynamics and foreshadowing. I owe a lot to Alan Moore’s writing on Watchmen, especially the “Under the Hood” segments. Aaron Sorkin can do no wrong in my book. Joss Whedon needs to be bronzed at some point. Oh, and that Shakespeare fella. He’s got some game.
AP: What does Frank Fradella do when he’s not writing?
FF: Professionally, I run a video production business called Paper Lantern Productions (http://www.paperlantern.tv/). I shoot and edit commercials for everybody from local businesses to national brands, like Sears.
Creatively, I make movies! I’ve got a short film in post-production right now and we recently took home a few awards for my work on my last film, Vox Angelica. I was in China last year working on my first feature film and the goal is to go back and finish that in 2011.
In my spare spare time, I host a multi-lingual music podcast called LINGO (http://www.hellolingo.net/), which features the very best in global pop music. 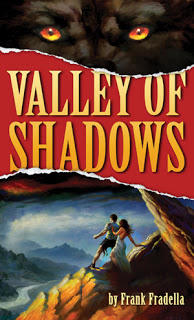 AP: Where can readers find learn more about you and your work?
FF: I’ve got a personal site over at Madman’s Mutterings (http://www.frankfradella.com/) and I keep that pretty up-to-date these days on all the goings on. It’s got everything from the latest episode of LINGO to doodles and sketches. It’s also got a semi-complete bibliography with appropriate links.
AP: Any upcoming projects you would like to mention?
FF: I’m excited to say that the long-awaited sequel to Valley of Shadows will be out in early 2011. It’s called A Capacity for Mercy and it’ll be followed pretty quickly by the third installment, Toil & Trouble. Valley of Shadows will also see a paperback release when Mercy comes out.
In the iHero world, we’ve got the monthly magazine, of course, but for those who missed any of my stories from our original six-year run can get them all in giant omnibus from New Babel Books called The Power Within. It’s a beast of a thing, but there was just no splitting it up. This is the definitive word on this universe.
AP: Are there any convention appearances or signings coming up where fans can meet you?
FF: I’m just now dipping my toes back into the convention circuit after being away a few years. I’ll be shaking hands and kissing babies at MegaCon in Orlando from March 25th through the 27th. After that… it’s anybody’s guess. I think I’m just going to follow you around, Bobby. You’re a convention maniac.
AP: You have served as a writer, editor, artist, and publisher. Are there any creative areas you’ve not worked in that you would like to try your hand at doing?
FF: I’ve also worked as a colorist, letterer, marketing manager, website developer and key grip. I’d honestly like less to do, thank you. The more responsibilities I can delegate, the happier I am. 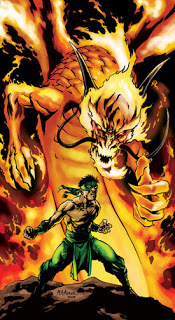 AP: And finally, what advice would you give to anyone wanting to be a writer?

FF: You know, I asked Harlan Ellison that question one day, back before I’d gotten anything published myself. He smacked me across the face and told me to go be a plumber. Hard to argue with that.

But seriously, the single most important thing about being a writer is developing the discipline that goes along with your talent. Nothing is writing but writing. Attending writers groups, reading writing magazines, doing research… none of it is actually putting your ass in the chair and putting two characters at odds with one another. Nothing else is writing but writing.

The second best thing to do, if you’re not going to be writing, is reading. I’ve got a few books you can try.