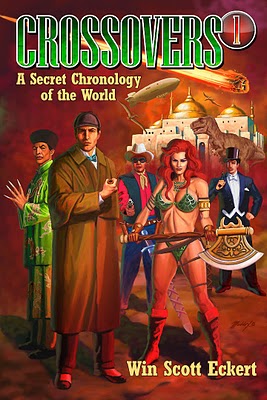 I need to explain some things.

First, this is a review of one title, CROSSOVERS, that is made up of two volumes.  The review will address the entire body of work.

Secondly, I am an information junkie.  A fact finder.  A minutiae monster.   And, probably most of all, a crossover collector and connection maker.  This fact is important to explain why I have the opinion of these books I do as well as just who these books are written for, in my opinion.

Win Scott Eckert, accomplished writer as well as pulp and fiction scholar, tackled what would to most anyone else not just be a daunting difficulty, but an impossible mission.  Essentially Eckert’s premise for CROSSOVERS relates to the Wold Newton Family/Universe concept.  Wold Newton refers to an idea that all sorts of fictional characters from every medium from movies, television, pulp magazines, comic books, radio, etc.  are intertwined, many of them being descendants of people who were present at a meteor strike in England near the village of Wold Newton.  This idea, originally posited by noted writer and icon Philip Jose Farmer, has been adapted, adopted, researched, and written both about academically and used in stories as well by a host of writers over the years, Eckert leading among them.

What are these two volumes about?  The history of an universe where Holmes and Tarzan meet and are related, where aliens landed millions of years hence, where H. G. Wells’ Time Traveler left his mark on more than the future, and where pulp heroes (as well as all other sorts of good and bad guys and gals) hung out, fought together, and had connections beyond just being fictional characters.

Done chronologically, CROSSOVERS tells a grand epic.  Actually, it encompasses multiple epics, hundreds and hundreds of story arcs, and thousands of scenes between characters that never met in their original incarnations possibly, but should have been tied together from the very beginning, and in some instances, were linked, even if it were accidental.  Starting six million years before Christ and going into the far flung future, Eckert lays out a geneaology, not simply of families present at Wold Newton, but a geneaology of an entire universe, where it started, where it went, and of multiple possible ways it would end. 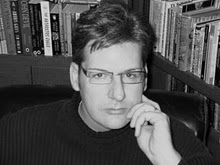 The amount of information Eckert squeezes into these pages is outstanding.  Not only are there hundreds of characters, both well known and barely remembered, mentioned, but Eckert goes to great detail in his notations to make sure the reader is aware of the source of each character, from whence they sprang, as well as the ways each character’s history has been augmented, changed, or revised.   This appeals so much to the information junkie in me because I now have not only tons of characters that I can work with, draw inspiration from, and include in my ideas and such, but I also have a guidebook to use to track down reams and reams of stories that I never knew existed, much less read. 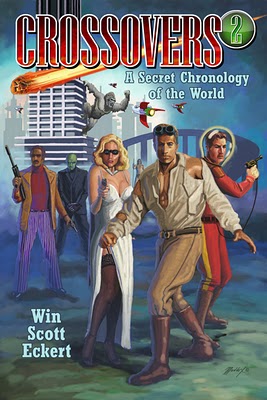 These books are meant for people who enjoy literature as well as the debate of literature, that being did Holmes live well past his creator and could The Shadow and The Spider have really been brothers and just who is Judex, and on and on ad infinitum.   Writers and artists seeking ideas and inspiration must have CROSSOVERS.  Fans of pulp and probably any other literary genre should seriously consider picking up this book.  If you’re trying to introduce a reader, though, to a new genre, like turning someone on to pulp, this isnt the collection for them.  It requires a taste for the characters and doesn’t provide much introduction material for a ‘non fan’.  Also, the entries are sometimes long and cumbersome to read, which requires the reader to want to have the information, to work their way through it.  This is not Eckert’s fault, but moreso simply a weakness of any such work that dares to not only encompass so much information, but also make sure the reader has that information.

The cover art by Mark Maddox sets off these books wonderfully.  When you pick one up, you not only know what you are getting, but the joy and wonder of seeing your first Holmes or Flash Gordon cover happens all over again.  Maddox truly captures on the outside what Eckert performs on the inside.

CROSSOVERS will always be near to hand for me as a writer and open and ready to help me as a reader find what wonders I have missed.   This is not only a great effort by Eckert, but a true accomplishment.