In 1972, Philip José Farmer created the Wold Newton Family with the publication of Tarzan Alive, where he postulated that many great heroes and villains of adventure fiction were all related.

This concept, that many different series were connected, has inspired writers like Howard Waldrop, Kim Newman, Alan Moore and Win Eckert. But one of the first to be influenced by Farmer was British Western writer J.T. Edson. 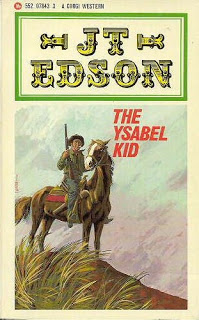 In many regards, Edson and Farmer have much in common. Both wrote primarily in genre fiction influenced by their formative reading. In the interview Philip Jose Farmer His Apocalyptic Life, Farmer refers to being “imprinted by certain heroes of my earlier reading, like Tarzan, Sherlock Holmes, the Oz books in general. I was just 15 when I read the first Doc Savage,” page 23. Edson began his “acquaintance with the work of truly great escapist writers such as – in alphabetical order – Edgar Rice Burroughs, Robert McCaig, Nelson C. Nye and Edgar Wallace. I also sat through hours of John Wayne, Randolph Scott, Errol Flynn and later, my all time favourite, Audie Murphy” J.T.’s Hundredth, page 19.

Farmer always wanted to write “a Tarzan, a Doc Savage novel, an Oz Novel and a Phineas [sic] Fogg novel” Farmer, HAL, page 22. Edson was given permission by Edgar Rice Burroughs Inc to publish the Bunduki novels as a spinoff of the Tarzan series and also by Penelope Wallace to use her father’s characters in his Company Z novels.

J.T. Edson was born in 1928 and in 1946 joined the British Army, Royal Veterinary Corps as a dog trainer, where he served in Germany, Kenya, Malaya and Hong Kong. Edson started writing story notes in longhand in notebooks. A win at Tombola (bingo) whilst in Hong Kong provided the funds to purchase a typewriter.
Upon his return to England, Edson took a writing course and heard about Brown Watson’s writing contest, where his Floating Outfit novel Trail Boss took second place and earnt him a book contract. Trail Boss was published in 1961 and Edson wrote a further forty-five books for Brown Watson before his contract was taken over by Corgi books in 1968. Whilst Edson had been trying to branch out from traditional westerns at Brown Watson, it was Corgi that allowed him the creative freedom he needed to fully explore the idea of an interconnected family of adventurers in a wider range of stories and genres.

EDSON’S SERIES
The Floating Outfit Series – 65 books first published in 1961
The Floating Outfit series centres on the adventures of Dusty Fog, Mark Counter and Loncey Dalton Ysabel (The Ysabel Kid), who act as troubleshooters throughout the West. The trio are joined at various times by other members, such as Red Blaze, Waco and Doc Leroy, but the core of the Outfit is Dusty, Mark and The Ysabel Kid. 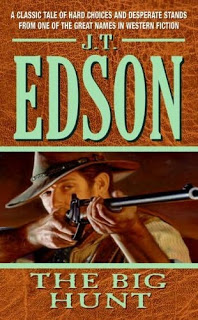 The Calamity Jane series – 12 books first published in 1965
Calamity Jane had appeared in a few of the Floating Outfit books and Edson felt that he could tell her adventures better than Hollywood and began to write a series of based on and inspired by the historical Calamity Jane.

The Civil War Series – 13 books first published in 1966
Throughout the Floating Outfit series Edson had referred to the Civil War service of Dusty Fog, and with this series he expanded and explored that time of Dusty’s life.

The Rockabye County series – 11 books first published 1968
The first series started by Corgi books, but several characters had appeared earlier in a series of short stories in Victor magazine. Set in contemporary times, this series tells of the adventures of the Sheriff’s Office in a border county of Texas. The main characters of the series became Alice Fayde and her partner, Bradford Counter – the great grandson of Mark Counter of the Floating Outfit.

Bunduki series – 4 Books starting in 1975
Starting life as a new adventure of Tarzan and Jane, Edson was refused permission by Edgar Rice Burroughs Inc to write the novel. Upon reading Farmer’s Tarzan Alive, Edson devised a way to resurrect his plot featuring James Allenvale “Bunduki” Gunn, Tarzan’s adopted son and Dawn Drummond-Clayton, the granddaughter of Korak. Bunduki is the great grandson of Mark Counter and cousin to Bradford Counter.
The series is set on the planet of Zillikan, where Bunduki and Dawn are brought to act as game keepers.

Ole Devil Hardin series– 5 Books starting in 1975
Ole Devil had previously appeared in both the Civil War and Floating Outfit series. This series gives Ole Devil a starring role, describing his involvement in the Texas War of Independence

Company Z series – 6 Books starting in 1977
The Company Z series featured the grandsons of the original Floating Outfit in an extra-legal company of Texas Rangers. Edson also used the series to reference the works of Edgar Wallace and three of the books serve as continuance of the Mr J.G. Reeder series.

THE WOLD NEWTON FAMILY AND THE HARDIN, BLAZE, FOG CLAN AND THE COUNTER FAMILY 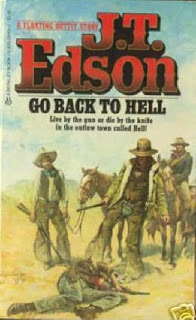 As can be seen above, prior to 1975, Edson primarily took characters who had guest starred in his Floating Outfit series and spun them off into their own series, but the Rockabye County series hints that Edson was already starting to consider the possibility of utilising the concept of an adventurous family to expand the scope and range of stories he could tell.

After the 1972 publication of Tarzan Alive, all of Edson’s new series were about extended members of the Hardin, Blaze & Fog clan and the Counter Family, and increasingly, the new books in the existing series utilised these connections and referenced these new family members and their expanded background. For example, the Rockabye County novel The Sheriff of Rockabye County makes reference to Bunduki and his adopted father; Bunduki and Dawn received a visit from Sheriff Tragg and his wife in the short story ‘Accident or Murder’ in More J. T.’s Ladies. The first Waxahachie Smith novel, Slip Gun had no connections aside from an earlier guest appearance in the a Floating Outfit novel, but the later novels had guest appearance by various members of the Floating Outfit.

As Edson said [I have]“become hooked on the fictionalist genealogy style of writing perfected by Philip José Farmer. This allows me to tie in various of my Western characters with the protagonists of the ‘Bunduki’ series of books.” J. T. Edson, quoted in Contemporary Authors Online, 2001, The Gale Group.

By 1979, Edson had expanded the Hardin, Blaze and Fog Families to the point that he was able to include a family tree in the front of J. T.’s Hundredth.  Edson also features a number of other families throughout his series. Several members of the Tragg and Turtle family have appeared, or been referenced throughout; The Ole Devil Hardin, The Floating Outfit, Company Z and Rockabye County series as members of law enforcement and leaders of the criminal element respectively.

Also appearing throughout the various series have been members of the British Besgrove, Woodstole, and Houghton-Rand families, most notably Lady Winifred Besgrove-Woodstole who married Dusty Fog in the Floating Outfit series.

REFERENCES TO FARMER AND HIS SPECULATIONS

After 1975, Edson appeared to consult with Farmer over various genealogical questions and a number of footnotes began to reference this.

Bunduki (1975) opens with the author’s note: “I would also like to thank Philip José Farmer, whose book Tarzan Alive supplied much useful information and details of the Greystoke family’s lineage.”

Page 142 “Ever since the fictional genealogist, Philip José Farmer, whom she [Dawn] had met whilst visiting the Counter family ranch in Texas, had told Dawn that Lady [Jane] Greystoke was related to the legendary Confederate State’s Secret Service agent, Belle Boyd, she had taken an interest in Savate.”

Sacrifice to the Quagga God (1976), the third Bunduki novel, is dedicated “To Philip Jose Farmer, the world’s foremost fictionist, genealogist,” and contains the same author’s note as Bunduki.

Set-A-Foot (1977) a Floating Outfit novel
On page 180, the footnote mentions, “Neither the author nor fictionist genealogist Philip José Farmer with whom he consulted have been able to trace Waco’s family background beyond his adoption.” 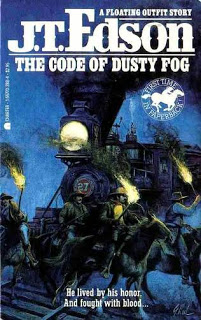 The Remittance Kid (1978) a Calamity Jane novel
On page 37, the footnote mentions that the researches of Philip José Farmer have established that Captain Patrick Reeder was the uncle of the famous detective, Mr Jerimiah Golden Reeder.
Page 44 states that the researches of Farmer suggest that Lt Ed Ballinger’s grandson, Frank, held a similar position in the Chicago Police Department at a later date and his exploits formed the basis of the 1957 TV series M Squad.

On page 187, the footnote elaborates that, according to Famer’s researches, Belle Boyd was the grand-aunt of Jane, Lady Greystoke (this footnote appeared in all subsequent books where Belle Boyd appeared most recently in Mississippi Raider, 1996).

J. T.’s Hundredth (1979)
On pages 335 to 337, Edson discusses the origin of the Bunduki series and the importance of Tarzan Alive to the process. He also mention that Edgar Rice Burroughs Inc had revoked permission to make reference to Tarzan in future volumes.

Fearless Master of the Jungle (1980) the fourth Bunduki novel

Author’s note: “I would like to thank Philip José Farmer for the permission he has granted allowing me to make use of his characters, Lady Hazel and Sir Armond John Drummond-Clayton.”

The Justice of Company Z(1980)
The page 76 footnote indicates that Farmer’s researches show that Wilfred Plant was descended from the illegitimate daughter of a scullery maid and Uriah Heep from Charles Dickens’ David Copperfield.

The Return of Rapido Clint and Mr J.G. Reeder (1984) a Company Z novel
The page 144 footnote refers to the fact neither Edson or Farmer were unable to find a connection between a gangster named Robin Hood and the earlier bearer of the name.

Diamonds, Emeralds, Cards and Colts (1986) A Floating Outfit novel
The footnote on pages 198 and 199 explains that Farmer’s researches have shown that there are two lady outlaws known as Belle Starr. The Counter family have asked that Edson and Farmer keep the true identity of the woman who appears in Edson’s novels a secret (this footnote also appeared in later works were Belle Starr appeared).

On page 166, the researches of Farmer have identified that the character referred to as ‘Matt’ and ‘the Big D’ was Marshall Matt Dillon from Gunsmoke.
The Code of Dusty Fog(1988) A Floating Outfit Novel
Pages 48 to 49 show that, despite the fact Edmund Fagin does not resemble the Fagin who appeared in Oliver Twist, Farmer’s research has shown Edmund was his grandson.

On page 68, when Paul Janus ‘Kickaha’ Finnegan is reviewing his family tree, Roxana Fogg “also met some of the relatives there, including the famous Confederate war hero and Western gunfighter, Dustine ‘Dusty’ Edward Marsden Fog. She was introduced to Hardin Blaze Fog, several years younger than herself. They fell in love.” 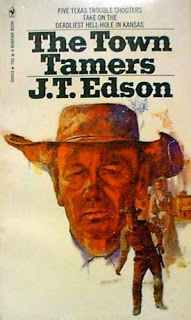 CONCLUSION
In 1972, Philip José Farmer published Tarzan Alive, where he postulated that many pulp and adventure heroes like Tarzan, Doc Savage, Sherlock Holmes, The Scarlet Pimpernel and The Shadow were all part of the same family that Farmer referred to as the Wold Newton Family. This concept of a family of adventurers and an interconnected series of exploits was very influential.

In 1975, J.T. Edson built on Farmer’s theories for his Bunduki series and expanded his own Hardin Blaze and Fog clan and Counter families with several new series Bunduki, Ole Devil Hardin and Company Z series, increasing the interconnections between all of his series. Edson also began to reference Farmer’s genealogical research in his novels. Farmer acknowledged this in one of his novels by referencing one of Edson’s characters Dusty Fog and making him a distant relative of the Wold Newton Family.