AERIAL ACROBATICS AND AIRSHIPS: CRIMSON SKIES IS A VISION OF PULP IN VIDEO GAME-FORM

Special Guest to All Pulp 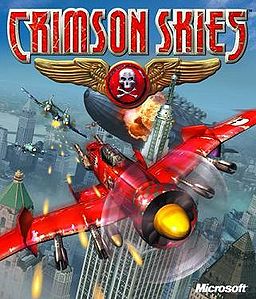 Throughout the years, pulp has trickled down and filtered out through all corners of pop culture, so it’s only natural that it would make it to the realms of video games as well. There have been some great pulpy games throughout the years but not a lot of them had a purely-pulp “feel” to them beyond a few noticeable influences. The Crimson Skies franchise, however, gets my nomination for “THE Pulp Video Game”, and although there hasn’t been a game released since 2003, pulp fans (especially fans of the air-combat sub-genre) should be interested in checking into the games or their affiliated fiction.

The Crimson Skies universe began in 2000 when Microsoft Game Studios released the titular game for PC. The game’s setting is an alternate-history version of the 1930’s, one where prohibition, the Great Depression, and internal strife between states resulted in the fragmenting of America. The country lies broken-up into several nation-states, such as the Empire State, the Nation of Hollywood, the Confederation of Dixie, etc. Because of the shaky political state, ground transportation between these areas ceases to be feasible and the nation’s real-life preoccupation with emerging flight technologies takes center-stage for shipping and travel needs. In the world of Crimson Skies, massive zeppelins cross the skies, airplanes are as plentiful as automobiles… and daring air pirates of varying degree of morality clash with air-militias and independent protection agencies.

In the first Crimson Skies game (for Windows 95/98/ME/2000), players take on the role of the swashbuckling Nathan Zachary, leader of the air-pirate group known as the Fortune Hunters. From their home base, the zeppelin Pandora, the Fortune Hunters act as air-pulp Robin Hoods: stealing only those who can afford to lose their wealth, all while helping others in need. The plot of the first game revolves around a corrupt security firm’s partnership with a ruthless band of pirates called the Black Hats and their plan to conquer a divided America under their control. The gameplay, meanwhile, is a mix of air-combat, light flight-simulation and stunt flying as players take control of a variety of souped-up fantasy warplanes. From the Hughes Aviation Devastator to the Fairchild Brigand, the planes are the real stars of the show: their designs wouldn’t look too out of place on the cover of classic air-pulp titles like Bill Barnes, and the first game lets you customize the look, performance, and armaments of your sweet sky-ride to suit your personal pirating tastes. 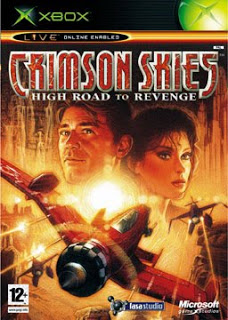 The sequel, Crimson Skies: High Road to Revenge, came out in 2003 for the Microsoft Xbox video game console. While much of the flight simulation and customization aspects were cut back from the original (players could now only use a one-time general upgrade for each plane), a more casual and “arcade-like” flight mechanic was introduced: players could now pull off maneuvers like barrel-rolls and Immelmann turns after only a few minutes of experimenting with the controls; the game featured a new play mechanic as well that let players man anti-aircraft gun placements on the ground and stationed aboard the Fortune Hunters’ zeppelin. This time around, the story features Zachary and the Fortune Hunters becoming involved with the secret invasion of America by the Crimson Skies universe’s analogue of the Nazis: a huge network of black-marketeers called Die Spinne (German for “the spider”). Along the way, Nathan encounters double-crosses, adventures in a lost valley, and other very pulpy predicaments. The climax of the game- in which the Fortune Hunters and their allies take on a massive storm-generating airship that’s attacking Chicago- plays out something like a pulp-era version of the Death Star battle from Star Wars. This is just one of the many of the grin-inducing moments experienced by long-time pulp fanatics like me. 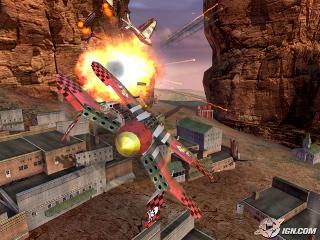 Even if you’re an air-pulp fan that doesn’t play video games you may still find it worth your while to check out other corners of the Crimson Skies franchise. Besides spreading out into a collectible miniatures game (sadly discontinued), there was also a smattering of licensed fiction available that was set in the Crimson Skies universe. Some of the short stories can still be found at the mirror-site of the Official Crimson Skies site (along with a nice who’s-who of the various factions, planes, and pilots & pirates), while a 3-story compilation novel was released by Del Rey (find it here at Amazon). The stories and the characters are a blast to read: from the hardboiled air-security man Paladin Blake and the Empire State’s dashing militia-man Loyle Crawford to the beautiful leader of the Medusas, Justine “Battle-Ax” Perot and the villainous Jonathan “Genghis” Khan of the Red Skull Legion (and, of course, Crimson Skies’ poster-boy Nathan Zachary), all the stories are a lot of fun and proudly wear their influences on their sleeve (the collected anthology is dedicated in part to Lester Dent, Walter Gibson, R.T.M. Scott and Robert J. Hogan).

The franchise has been dormant for a while, but every once in a while there are rumblings and rumors of its return (at one point, there was even a big-budget film in the works). Many of us who have found the game to be the perfect pulp video game, or fans who don’t know pulp from Adam but love a fun and adventurous flying game, hopefully await the return of Crimson Skies with bated breath.