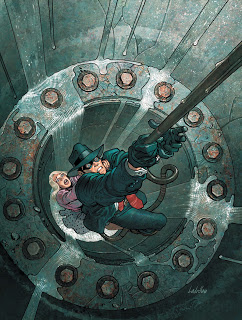 THE SPIRIT: ANGEL SMERTI TP
Written by MARK SHULTZ & DAVID HINE
Art and cover by MORITAT
In this first collection of the new SPIRIT series, an international crime syndicate wants to help Central City’s villain, The Octopus, consolidate control over the underworld. They’ve offered The Octopus the services of one of their finest assassins to take The Spirit’s breath away for good. Collecting THE SPIRIT #1-7.
On sale MARCH 16 • 168 pg, FC, $17.99 US 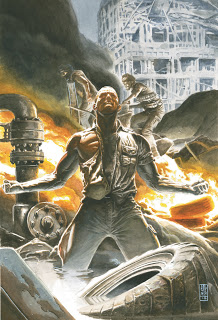 Written by IVAN BRANDON & BRIAN AZZARELLO
Art by NIC KLEIN
Cover by J.G. JONES
Doc Savage’s adventure in the war-torn Zone races toward its unbelievable finish, as the secrets of the Two Who Are One – and Ronan McKenna’s disappearance five years ago – are revealed! But Doc’s discoveries may have set in motion a terrible fate for the Zone’s innocent inhabitants!
On sale FEBRUARY 9 • 32 pg, FC, $2.99 US 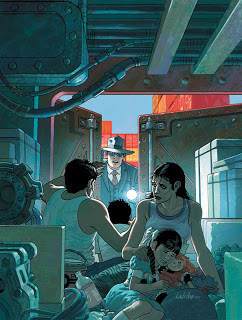 THE SPIRIT #11
Written by DAVID HINE
Art by MORITAT
Cover by LADRÖNN
Has the Octopus gone soft? New York godfather Shonder Zeev thinks so, and he intends to cut in on Central City’s action and dismantle the truce the Octopus has with Commissioner Dolan – by sending an unlikely assassin to end Dolan himself!
On sale FEBRUARY 16 • 32 pg, FC, $2.99 US