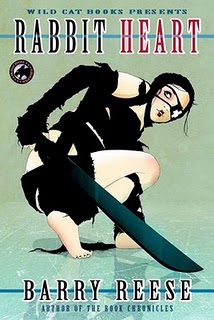 Sometimes even pulp writers forget that the Pulp genre has levels like an ogre…er..uh…an onion.   And granted, we love to write the high powered action, the over the top adventure, the weird villains, and larger than life heroes.  But we sometimes forget that pulp just isn’t a style of literature.  Like any written work, pulp can explore the basic concepts that drive people to do what they do.

Rabbit Heart does that.  Wow, does it do that.

Barry Reese’s horror/supernatural pulp novel isn’t just about a young lady who is attacked by a serial killer horror movie reject as a child and then later finds out that she’s actual a spirit given life to continue The Wild Hunt.  Oh, it’s definitely about that and Fiona, the central character, is a fully realized individual, but not just because she wields a machete and has an eye patch.  Reese effectively works in the angst any young adult woman would feel into who Fiona becomes, including sexual awkwardness, desire, worry about her future, all of the things that make DeGrassi DeGrassi fits right into this.  Along with demon like creatures, a cosmically overactive libido, and a fantastic rendition of a public domain Pulp hero backing up Fiona.  Characterization is top notch throughout this book.

Now, let’s talk about the sex.  And the violence.  Yes, both are in here from the beginning and this isn’t for your kids to read in any stretch of the imagination.  Let Doc Savage and The Rook bring in kid readers, this one’s for Mom and Dad.  What Reese does, though, isn’t arbitrary.  Each of the characters in this story are driven by their basest desires and due to the Hunt, those desires rise to the surface like lava in a volcano.   They are sexual creatures, they are violent creatures, and those very things make the story live and breathe and move the story along.  It’s not gratuitous sex and violence.  They are characters all by themselves.

The only issue I had at all with RABBIT HEART was an issue of exposition at the beginning of the book.  Reese is introducing a heavy concept as the center of the novel and basically did a large, somewhat jarring information dump in the first twenty or so pages.  It all evens out very quickly and by the end of the book, I was glad he had done it, but it was a little bit cumbersome initially.

Overall, I can’t recommend RABBIT HEART enough.  And I am tickled that Wild Cat just announced two sequels to this awesome work.