Interview with Martin Powell for THE SPIDER:  Curse of the Unholy 3 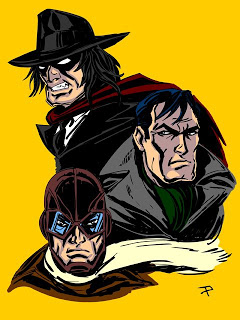 AP:  Martin, there’s wind of a new project you have with Moonstone Books.  Can you share any information with ALL PULP on that?
POWELL:  Absolutely.  Moonstone just recently gave me permission to announce the deal.  Along with the continuing bi-monthly SPIDER series (to debut in January) I’m also writing THE SPIDER Special # 1, “Curse of the Unholy 3”, illustrated by the impeccable Jay Piscopo.  It’s sort of a SPIDER Annual issue, and will feature the first-ever team-up of THE SPIDER, G-8, and OPERATOR 5.
AP:  What were some of the influences for “Curse of the Unholy Three”?
POWELL:  Jay and I were inspired by the classic Fleischer Studios’ SUPERMAN animated series, and great Saturday morning cartoons like JONNY QUEST and SPACE GHOST.  We’re lending an animated style to the pulps, a natural approach, we think, which will give the genre an added dimension.  Mainly, we’re dedicated to telling a very fun, fantastic story for pulp fans that’s also designed to snare non-pulp readers into our web. 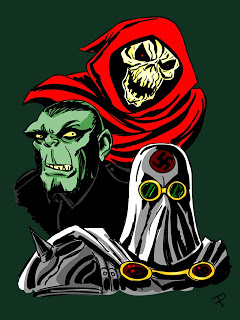 AP:  What’s the general storyline of the tale as you see it now?  Are there any big picture statements to be made with this tale or is it just a good ol’ pulp romp?
POWELL:  Teaming THE SPIDER, G-8, and OPERATOR 5, in one epic adventure, is cause enough for a historical celebration!  I’ve always been amazed that no one has attempted to do this before.  Three classic, very evil adversaries are returning, too.  And that’s all I can tell you for now.
AP:  Why these three heroes? What makes them special and especially important to this tale?
POWELL:  THE SPIDER is one of the most popular pulp heroes of all time.  His fans are legion.  Since I became the regular SPIDER writer I’ve been amazed how many of his fans are out there—all over the world.  There’s a great excitement brewing with the SPIDER’s return.  G-8 AND HIS BATTLE ACES is a long-time favorite, as well, having starred in over one hundred novels, featuring the weirdest, most bizarre exploits the pulps ever produced.  Yes, I’m serious.  If you mixed the Golden Age of Aviation with THE  X-FILES, that could be blended into G-8.  Except G-8 is even stranger.  Lastly, OPERATOR 5 was clearly an inspiration for super-spy James Bond.  Jay and I just had to bring these guys together! 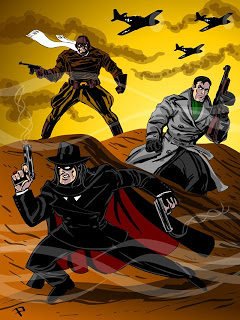 AP:  Jay Piscopo is riding shotgun with you on this project.  How did this partnership come about and what do you think Jay brings to the table?
POWELL:  We actually met through mutual friends on Facebook, and I became a fan of Jay’s artwork the instant I saw it.  He’s doing something in his CAP’N ELI, COMMANDER X, and SEA GHOST comics that the industry really needs right now, namely, he’s making comics fun again.  I knew I wanted to work with this guy, and this is only the beginning of our collaboration.  Also, I want to stress that “Curse of the Unholy 3” was Jay’s brainchild, right from the start. When he first pitched the idea of an “animated-style SPIDER adventure, co-starring G-8 and OPERATOR 5”, I was immediately hooked by the concept and knew I just had to write it.  Luckily Moonstone was just as enthusiastic about our submission and it sold almost immediately.  Far as this project is concerned—everybody wins.