Review: ‘Being Human’ Seasons 1 and 2 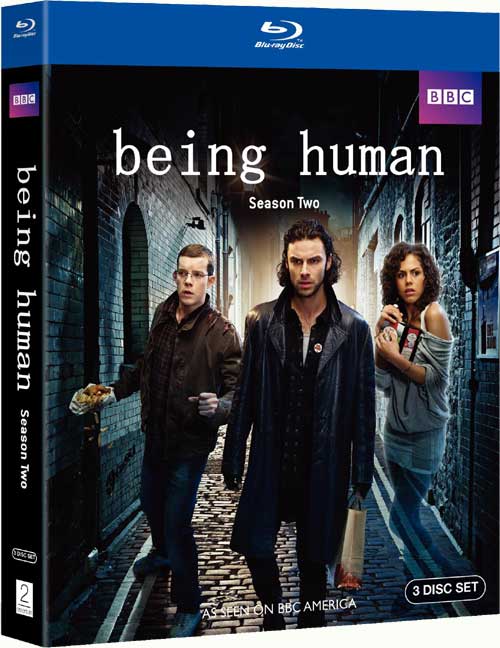 The British approach to genre television is markedly different than the American shows. Series such as [[[Primeval, Torchwood]]], and [[[Being Human]]] take an adult approach to science fiction and horror, creating a fresh assortment of characters and settings, unencumbered by writing for frequent commercial breaks and letting their characters grow and evolve.

Over the summer months, we were given an opportunity to compare and contrast this approach as SyFy offered up the lightweight, albeit entertaining [[[Warehouse 13]]], while BBC America gave us Being Human. The series has lasted two seasons on British television and both are available in nicely packaged DVD sets released by BBC and Warner Home Video.

For those unaware, Being Human posits that a vampire, a werewolf, and a ghost can try to achieve a normal life by sharing a home in Bristol. Over the course of six episodes, the first season introduced the characters, their back stories, and chronicled their attempts at leading their lives. You have your 90 year old vampire Mitchell (Aidan Turner), who left a coven bent on some form of global domination; then there’s George (Russell Tovey) who was bitten by a werewolf and now works as a hospital orderly while removing himself from human contact every thirty days or so; and finally, there’s Annie (Lenora Crichlow), a newly minted ghost, haunting the flat they share. Her story and growth as a character forms the spine of the first season.

Watching them interact with one another and with humans is a constant study in contrasts and emotions. One story in season one has Mitchell befriend a lonely young boy living across the street with tragic consequences. George also tries to have a romantic relationship with a fellow hospital worker, unwilling to share his secret with her.

Season one began slowly but grew with every episode, gaining confidence in the characters and larger supernatural world they inhabit. It is not a heavy effects-laden show, but there’s enough to remind you that there are scary things in the dark. 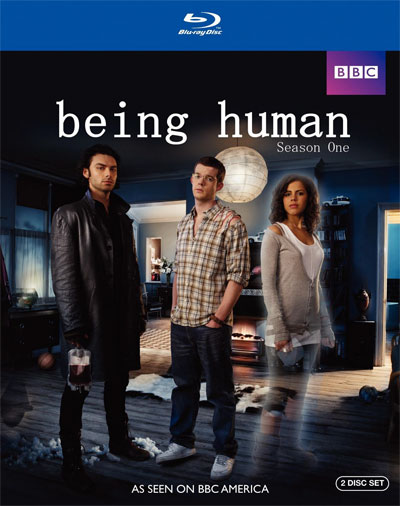 The second season grew to eight episodes and introduced more mystic
threats from vampires and vampire hunters. By now, Annie has accepted
being a ghost, refused a trip to Heave, and is now corporeal, working in
a pub (an oddity never quite explained in a satisfactory way). George
and Mitchell try and find new loves but complications continue to
prevent either from enjoying true happiness. Structurally, their three
stories tend to separate until the final episodes when things come
together without quite dovetailing. Creator Toby Whithouse wrote the
opening and closing two episodes, giving the series a consistent feeling
lacking from too many American shows. Having said that, the show starts
and ends threads way too fast so sometimes characters act in ways you
would not find acceptable or realistic. George’s whirlwind romance in
season two comes to mind  On the other hand, Mitchell’s experiences with
Josie, a woman he knew in the ‘60s and again today. Are nicely handled
so Whithouse certainly knows how to do this. Disappointingly, the second
season ends teasing a promised third season that has yet to begin
filming. Worse, SyFy is trying an Americanized version that will no
doubt pale in comparison.

Both seasons look terrific in Blu-ray with strong transfers and good
sound. Season one offers up some standard definition extras including
deleted and extended scenes, video diaries with the cast, character
profiles, Vamping it Up, and an interview with Whithouse. The second
season continues the thin extras including Blood Bursting, a lengthy
look at how the werewolf in the pressure chamber was created; The Caves,
which shows where the Inquisition sequence occurred; Unleashing the
Beast, as the cast and crew discuss George’s sub-plot; The Swinging
Sixties, exploring the flashback sequence; Behind the Makeup, Making the
New Werewolf and Train Carnage, which showed how this climactic scene
was created.

Overall, the series is engaging and different enough to make you come
back for more. It certainly could be a little stronger but its serious
tone and winning performances make this well worth you attention.