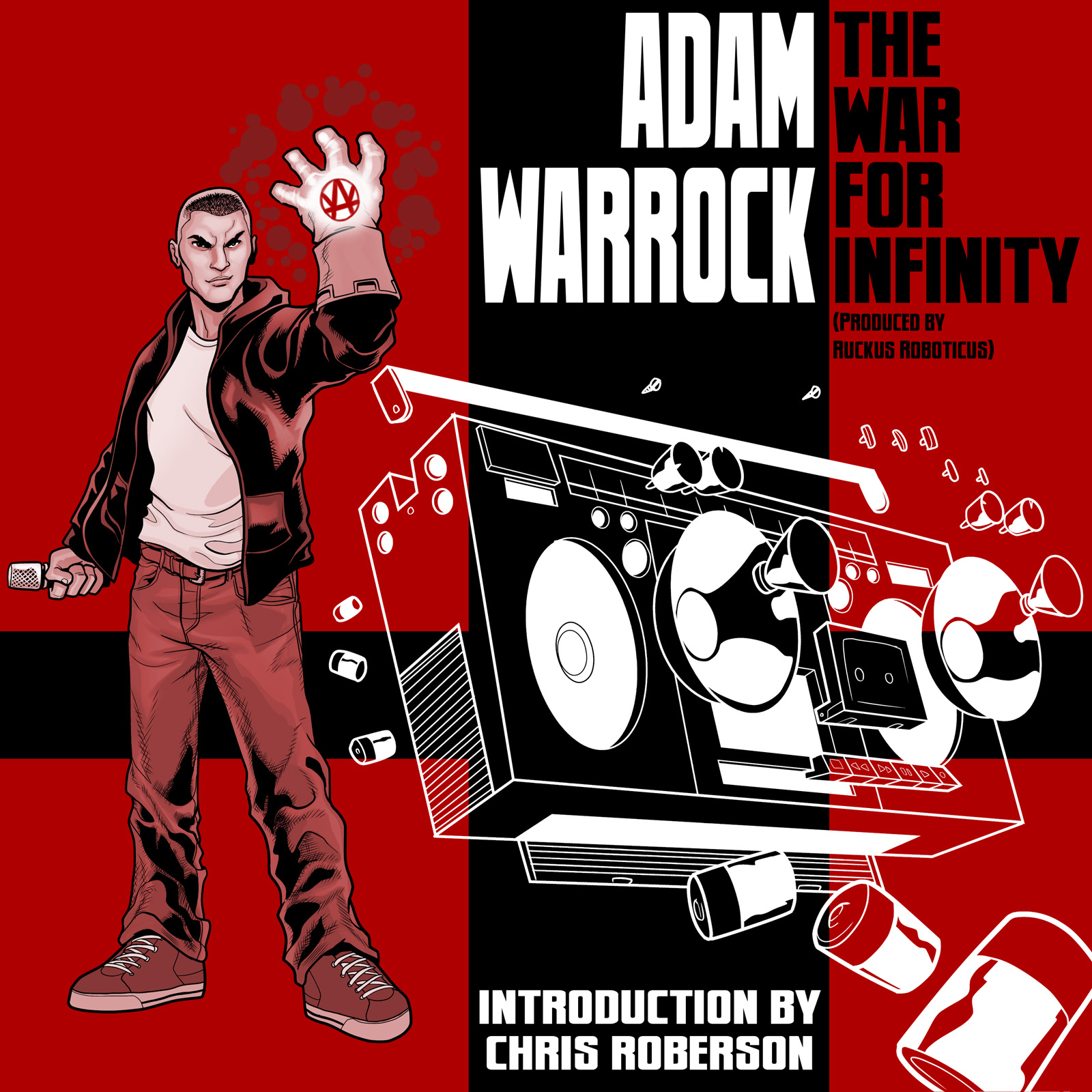 This may be the shortest review ComicMix has ever run: take everything I said about Kirby Krackle and their method of applying lyrics that reference comics and video games to catchy tunes (rather than vice versa) earlier this year, replace “rock” with “hip-hop,” keep the intelligence, sense of humor, and sheer fun, and call it a day. But that would be doing Adam WarRock‘s new album “The War For Infinity” a grave disservice.

As you might guess from his naming scheme, Adam WarRock (real name: Eugene Ahn) takes a lot of inspiration for “The War For Infinity” from the Jim Starlin cosmic Marvel epic [[[The Infinity Gauntlet]]], with Adam WarRock and Demonos (played by guest artist Tribe One) standing in for Warlock and Thanos, respectively. In the universe of “The War For Infinity,” Demonos is a evil, arrogant self-described “legend” who’s given the Infinity Gauntlet and a second chance by the dark powers of the universe after Adam WarRock takes him down a peg in a rap battle.

The highlights of the story for me are the three Battle tracks (Introductions, Reprise, and Finale), which see Adam WarRock and Demonos taking turns on the mic and viciously tearing into each other. Sample verse: “You may have made it to the bonus round but you’re still going down/Only now, your foolery amuses me/There are six million ways to die/choose three.” That’s not to say the rest of the tracks are any slouch: Adam WarRock writes catchy and memorable lyrics, and producer Ruckus Roboticus puts everything together into a package that’s easy on the ears.

But my favorite song on the album, bar none, is The Silver Age, again featuring Tribe One. It’s not part of the WarRock/Demonos story, but it serves as sort of thesis statement for the whole album: they’re the Silver Age MCs, and they’re here to “bring back what Stan and Jack made” with innovative music and rhymes. It has a catchy beat, an incredibly memorable hook, and – best of all – Tribe One describes himself as a “Mental Organism Designed Only for Killing This Mic,” which is essentially the most perfect comic book reference I’ve ever heard.

I’m trying not to gush, but in case you couldn’t tell, I think the world of Adam WarRock and “The War For Infinity.” And for $10 ($12 for the recommended Deluxe version with remixes and a digital download), you get a ton of rock-solid, memorable hip-hop content that just happens to be about comic books. Better yet, it includes the bonus track “Ira Glass,” a really fun tribute to the “This American Life” host of the same name.

I didn’t mention Kirby Krackle at the start for nothing: the two are performing on stage together at the Rock Comic Con event this weekend. It’s an auspicious meeting, because while they work within different genres, they have one thing in common: awesome music with a slant towards the fandom.