Deadline Zombies: the adventures of Maxi and Moxie

Synopsis:
Chasing a headline is just a job for ace reporter Moxie Donnovan, but sometimes those headlines turn on him and bite. Moxie, along with his sexy better half, Maxi (a theater and film actor) face a tiger-sized panther, mechanical gunmen who support the master race, Irish Fae with the urge to pay Moxie back for the loot his grandfather took from them, murder and a hypnotist intent on re-filming Ben Hur.
Author Teel James Glenn writes a compelling fantasy adventure inspired by the pulp fiction of the 1930s (with evil Nazis, sinister magic, and a wise-cracking and sympathetic protagonist in Moxie). Although Glenn’s work pays homage to the classics of the 1930s, he gives Maxi, Moxie’s love interest a far more active role than typical in the stories actually written in that era, helping to make his story resonate with the modern reader.
Glenn has done his research. Language, period details, stage and movie references, and social settings all ring true, but his emphasis is on the story rather than on the history. Magic plays an integral role in the Maxi/Moxie adventures, but somehow Moxie remains a skeptic, always looking for the human explanation for what’s going on around him. 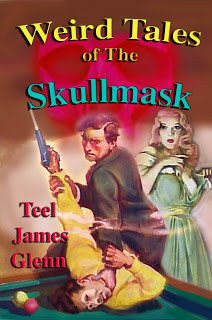 Weird Tales of the Skullmask

Synopsis:
Since mankind crept out of the caves, violence and injustice has been a common thread. And since those early times, the most harmed have called out for justice. For those most harmed, most in need, a strange object offers hope. Made from the skin of its first owner, the Skullmask provides its wearer with the knowledge, skill, speed, and intelligence of the countless others who have called on its power. But the Skullmask demands its price, and the Skullmask only appears when all else fails, and in those horrible cases where Revenge and Justice are one.
WEIRD TALES OF THE SKULLMASK follows the Skullmask from a western town where rich ranchers terrorize farmers and their Mexican-born workers, on to a Caribbean island where Voodoo Loa and zombies hold sway, then to the city-room of a major newspaper where a reporter faces off against the German-American Bund, and finally to a post-WWII drug smuggling operation. In each case, ordinary justice has failed…but the Skullmask offers hope.

Author Teel James Glenn just happens to be a professional fight choreographer, jouster and veteran of fifty renaissance faires, scores of films and hundreds of T.V. appearances.
He also the author of several dozen books, including , Death at Dragonthroat Sister Warrior, The Daemonhold Curse, Of Swords and Sorcery and Tales of a Warrior Priest. The Escape Artist 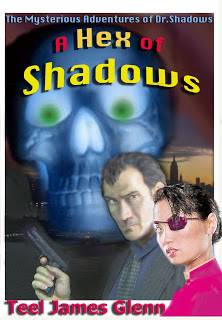 eBook Description: In the year 1937 the world trembles on the brink: Dr. Shadow, Former stage magician, Anton Chadeaux, is paralyzed in a plane crash in Korea is rescued and taken to a secret Sulsa monastery where for years he is bathed in strange herbal mixtures and taught ancient secrets. He is reborn as a grey skinned Goliath with a mission: help the helpless, give hope to the hopeless and punish the truly evil of the world. Join him in six mysterious adventures as he: Investigates a murder attempt on the father of a friend? Faces a mysterious killer called the Shade of Death? Must figure out how a ‘locked room murder’ of the head of a New York Tong and save his lady friend friend ‘Hank’? Faces the vicious Mauler Manzetti in a charity boxing match? Encounters machete wielding killers, in the world of Voodoo ? And lastly, when Dr. Shadows’ friend is murdered in New Orleans is forced to enter the deadly Bayou Sinistre. Mystery and action as if straight from the pages of the Pulps of old?   eBook Publisher: epress-online/epress-online, inc., Published: 2010
Available on Fictionwise And Amazon.com Release Date: March 2010
Share