HANCOCK TIPS HIS HAT TO THE ROOK VOLUME FIVE!! 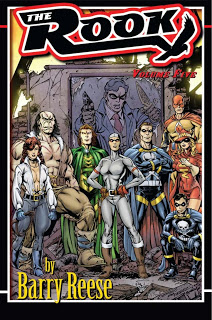 There is always great comfort in reading the new adventures of a character you’ve read before.  Clichéd though it may be, it truly is like revisiting an old friend and coming away with new tales and stories and desperate for the next time you meet.  I am glad to say that reading THE ROOK: VOLUME 5 by Barry Reese from Wildcat Books gave me that exact feeling.   Once again, Max Davies and his crew of allies and enemies, some new additions, others old friends, are back to wow and amaze with tales of pulp heroics, action packed daring do, and good ol’ fashioned black magic.  This book has all the hallmarks of past Rook volumes and, although weaker in some areas than its predecessors, still delivers a decent flyin’ one-two punch for pulpdom.
THE DIABOLICAL MR. DEE is a tale that, in this reviewer’s opinion, could have been and probably still be expanded into its very own novel. It introduces a concept of a super team for the Rook, his ‘Claws’ and pits Max and crew against a host of awesome villains.  Reese plays with all sorts or archetypes within this one, including swamp monsters, flame heads, and dimension traveling sailors.  By far one of the best stories in the collection. 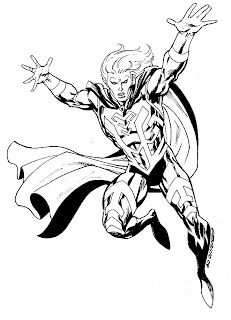 PLAGUE OF WICKED MEN is the reason that the previous tale was listed as ‘one of the best’ in this volume.  This story must be its own novel at some point.  So much is wrapped into this tale, the Rook’s Claws again, along with Captain Hazzard, Ki-Gor, Cthulu, and so many more hints and tips of the hat to the pulp genre that it very much carries a great weight, one a lot of tales would crumble under.   This one does not only stand the weight, it carries the load well.   Reese weaves in this multitude of characters, including a fantastic handling of Professor Stone, an original pulp creation of Wayne Skiver’s,  and still tells an engaging adventure, develops characters further right along with the fists and guns, and provides a very satisfactory ending in that loose ends are tied up and new ones dangle.
THE DEVIL’S SPEAR is yet another epic, sweeping adventure of the Rook and his Claws, but it’s more than that.  This story brings back major elements of the Rook mythos, including an old villain, Max’s father, and even deals with the end of one regular and a new chapter for another.  Add to that a certain mustached German leader and the Lord of the Vampires and you have one heckuva ride.  This one, however, does suffer under the weight of its contents more than the previous two.   Although it is a good read, it sometimes gets bogged down in who’s in the story more than the story itself.  So many characters are thrown into the mix and the balance, though maintained for the most part, between characters and story for the most part, gets unwieldy, especially toward the middle. 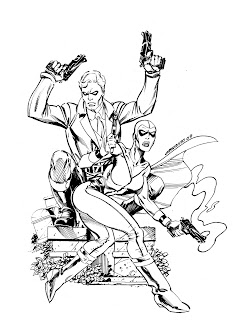 THE IVORY MACHINE is a good read overall, but to be honest, there was little in it to set it apart from the three previous stories.  It was the usual good mix of characters, history, and magical mayhem, but it did not have the spark that the three preceding stories and most of The Rook’s previous adventures contain.  Is it worth reading? Yes, because it has all the traits of a good Rook story, especially the care and attention that Reese gives the characters.  Is it a stand out?  Frankly, no.
THE DEVIL’S DUE is a Rook story written by Stacy Dooks.  It spotlights a different Rook and a different era.  Our hero is William Davies, although Max and Evelyn are still around and heavily involved, and our villain is…well there’s a few, one that has ties to William’s father time as The Rook.  This story was enjoyable and Dooks ably wrote a tale that is extremely reminiscent of comic book type tales of the 1960s.  It had a very cool, sleek Silver Age feel to it and the characters were easy to visualize…for the most part.  Dooks’ rendering of the new Rook, his sister, and the couple of new villains thrown into the mix were dead on for the period he seemed to be emulating.  I wasn’t as convinced of his characterizations of Max and Evelyn, though.  They seemed out of place in this story, like pieces that should fit, but didn’t.  But other than that, this was a cool addition to the volume and to the legacy of The Rook.
The art for this book hit about half and half with me.  Some of the images were evocative of old pulps and stood out as things I’d hang on my wall.  About half of them, though, looked like standard comic book profile images, characters we’ve all seen before in different poses just with different clothes and such.  The art wasn’t necessarily bad, it just didn’t contribute much to the package.
Overall, a good read.  Is it the best volume of The Rook…no.   Does it add dimensions, layers, and nuances to the Davies legacy that are awesome and make for great pulp.  No doubt.
Three out of Five Tips of Hancock’s Hat (Three tips are generally reserved for those tales that I enjoy and make for good pulp readin’.)
Share