AP:  Will, ALL PULP really appreciates this opportunity to visit with you.  Let’s pretend that there are people reading this who know little to nothing about pulps and don’t know who you are.  Give us some personal and professional background on Will Murray.

WM: I am this lost soul who stumbled into the world of The Shadow, Doc Savage and the pulps and never found my way back to my True Path. Consequently I am the author of over 50 novels, most featuring the indomitable Remo Williams and Chiun. A smattering star Doc Savage and his merry misfits, The Executioner, and others. Somehow, through diligent research and omnivoracious reading of pulps, I am became an expert on All Things Pulp.

AP:  This interview is a part of our MOONSTONE MONDAY.  What specifically have you written/are you writing for Moonstone?

WM: I’ve contributed to many of the Moonstone hero anthologies of the last few years. Right now, I’m trying to finish my third Spider prose story, “Clutch of the Blue Reaper,” for Spider Chronicles Vol. 2. It’s my favorite so far, being full of frenetic Norvell Page-style hyper-action in which for a change Nita van Sloan ends up in slammer, charged with being the infamous Spider!

Also on the horizon, I’m pleased that my Green Hornet tale, “The Night Car,” leads off The Green Hornet Chronicles Vol 1. I tried to write it exactly like an episode of the ’66 TV show, and it appears that I pulled it off. What happens when a computer whiz designs a program which will track the Black Beauty back to its lair?

I came up with a really wild premise for my contribution to Avenger Chronicles Vol. 2. Originally, the character of Smitty was a Black guy. What if, I thought, a Black Smitty shows up at Justice Inc. HQ, acting like he’s the real deal? Then what if he WAS the real deal? I called that dark tale “The Changeling.”

There’s a Sherlock Holmes story scheduled for in a Holmes crossover anthology. Rather than team him up with another fictional character, I matched him with Colonel Richard Henry Savage, the real-life inspiration Doc and The Avenger. Savage was so larger than life that he plays well as an semi-fictitious person. That’s “The Adventure of the Imaginary Nihilist.” It’s based on a true event in Savage’s remarkable life.

My first Secret 6 story, “The Meteor Men” will reintroduce Robert J. Hogan’s intrepid band of adventurers as they plunge into a maelstrom of horror which results after a green meteorite crashes near their Long Island headquarters and suddenly the surrounding towns are filled with green-eye Zombies shooting death beams from their unblinking eyes. For the sequel, it will be up to the Canadian border for an old-fashioned Wendigo hunt. After that, Mole Men start pouring out of caves and cracks in the Earth. Life is never dull for the wanted fugitives who call themselves the Secret 6! 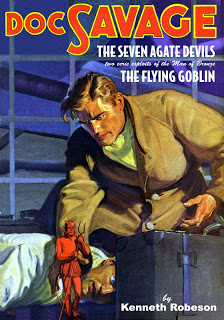 AP:  You are closely associated with Doc Savage and the Lester Dent estate.  Can you share a little background on “Doc Savage: The Lost Radio Scripts of Lester Dent” recently published by Moonstone.  Many pulp fans may not be aware of scripts actually written by Dent.  How were they ‘lost’, were they ever recorded, could you just share a bit about this project?

WM: Doc creator Lester Dent scripted back in 1934 26 episodes of a syndicated Doc radio show. No recordings survive, but I have the scripts. We put them all together, including some unproduced scripts, like the one adapting The Man of Bronze, in a nice fat illustrated book of Doc Savage tales that never made it into the pulp magazine. It’s a must-have for all Doc fans. I’m really proud of it.

AP:  It was announced sometime back that you would be working on new Doc Savage novels? Can you discuss anything about where you are in terms of that project currently?

WM: I’m talking to two publishers right now. The reintroductory novel, The Desert Demons, is finished. Joe DeVito has painted a magnificent cover, using a 1960s photo of model Steve Holland as Doc. Horror in Gold is drafted and Joe is working on that cover. Five other Docs are in various stages of construction. It’s only a matter of landing a deal that works for everyone. Stay tuned.

AP:  Although Doc is tied to your name quite tightly, you are also noted as an overall Pulp Historian as well as a writer.  You’ve written stories for Moonstone centering around two other pulpy type characters that never actually appeared in the pulps: The Phantom and The
Green Hornet.  What about heroic characters in masks appeals to the prose writer in you?

WM: If you are what you eat, you become what you read as a kid. I was always a fan of comic book superheroes and similar supermen. So I naturally gravitated to their literary ancestors, the pulp heroes. Writing about ordinary people bores me, I guess, because I’m not very ordinary. So out of my imagination have come novels and stories starring characters ranging from The Destroyer to Nick Fury, Agent of SHIELD. It’s a living. I’m not sure the mask is key, since Doc Savage is my favorite character. But I do like mystery men. They never disappoint.

AP:  In no way are you sexist when it comes to pulp.  You are the creative force behind HONEY WEST, a revival of a character, yet again for Moonstone.  Who is the ‘historical’ Honey West?

WM: Honey was a hot LA private eye back in the 50s and 60s, and the star of a series of top-selling paperback originals by the husband and wife team who called themselves G. G. Fickling—the true creative force behind Honey. She had her own TV show which I watched faithfully back in ’65. When Joe Gentile offered me a menu of characters to write, I skipped over favorites like The Spider to do Honey, Why? Well, I had written the first new Honey West story in almost 40 years for Moonstone’s planned Honey West Chronicles, and it just wrote itself. That fact that they are told in the first person meant that I could do a better job in the short story length than say, Operator #5, another favorite of mine.

I agreed to pen 3 prose stories and 3 comics scripts per year. I had done one of each, and out came the HW comic book by Trina Robbins! So I don’t know where my stuff stands at the moment. But I will resume writing them once Joe figures it all out. I have plotted ‘em all, btw.

AP:  Now that we know where Honey West came from, where do you plan to take her now that you’re writing her adventures?

WM: Well, I’d like to take her out to dinner. But Moonstone’s license prohibits fraternization between writers and characters. J Since I’m setting these new stories back in her heyday and they are petty lean, my sole focus is in getting her right and keeping her real. If the series goes anywhere, it will be because Honey is leading me. J Stories written so far are “Cat’s-Paw in Heat,” “Seer Suckers,” and “Tapestry in Teal.” 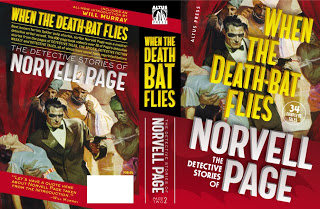 WM: Over the years, this has covered activities such as interviewing survivors of the pulp era to get their stories, and reading through decades of old magazines like Writer’s Digest and Author & Journalist to ferret out cool pulp lore. All of this is poured into articles for the Sanctum Books’ Doc and Shadow reprints, not to mention introductions to volumes like Altus Press’ massive Norvell Page collection, When the Death-Bat Flies, just about out. I’ve written about 30 intros for Altus, Black Dog Books and Off-Trail Books in the fast three or four years. I’m a busy historian.

WM: Pulp is relevant because entertainment is always relevant. Prose styles, means of delivery, types of heroes and their opposite numbers may change with each half-decade, but pulp stories and pulp heroes will always be with us. Always. Check back in a 100 years and you’ll find I am correct. 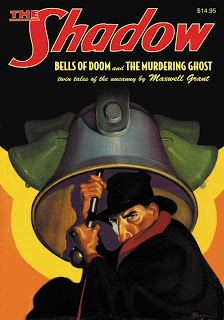 WM: I suppose The Shadow is the top one. But with so many unreprinted Walter Gibson Shadow novels, why bother? Still, it’s my dream to write an authentic Doc Savage-Shadow crossover novel. Maybe some day….. I once plotted a Bill Barnes novelette with original author Chuck Verral. I’d love to write that one. A Spider novel would be fun too.

WM: People read certain characters—Sherlock Holmes, Doc Savage and The Shadow to name three—because they want to be taken back to the specific time period of those heroes. Other characters like Superman, Batman and James Bond have been around continuously for so long that they have naturally evolved with the times. So both approaches can work, depending on the hero. As a writer, it interests me most to step into the shoes of a dead writer and write his hero as closely to the way he would have done it as possible. It’s a bigger, better challenge. A Will Murray Doc Savage mav or may not be interesting in itself, but a Will Murray-Lester Dent Doc collaboration is, I hope, the best of both worlds. Some day I may stumble upon a vintage hero who begs to be updated. Hasn’t happened yet.

With Secret 6, I hew straight to the original stories in their time. The series didn’t last very long, so I thought I would see where it might go in its own era. You could update them, but I suspect Joe asked me to write this series because it was a weird analogue to Doc Savage. And why waste Will Murray on an update? Anybody could write that.

About Honey West, I feel the same say. She’s an expression of her time. I had never read any of the original novels, but I did for this project and I was delighted to discover that she has the same voice as Anne Francis. Another reason the stories write themselves.

When I did the Phantom, I jumped around. But the most recent version was set in the 30s—even though he’s the same Phantom sitting on the Skull Throne today.

Having written a 60s Green Hornet, I’m planning to tackle the radio version in a story I’m calling “The Black Torpedo.”

AP:  Any upcoming projects you haven’t discussed that you care to share with the readers?

WM: Yes, I can officially announce for the first time, the October 1 release on CD and in downloadable formats the 25th anniversary rerelease of Roger Rittner’s Adventures of Doc Savage radio show from 1985. Roger has remastered the series, which adapts Fear Cay and The Thousand-Headed Man, along with a Bob Larkin cover and a new audio documentary on the making of this now-classic series.
Doc Savage is rarely done right. This is one time we got it right. I say, “we” since I scripted Thousand-Headed Man. Check out Radioarchives.com for ordering info.

Beyond that, I have a lot of Cthulhu stories coming up in various anthologies like Mythos Books’ Cthulhu 2012 and others yet untitled. Watch for them.

AP:  Thank you again so much for your time on this MOONSTONE MONDAY!