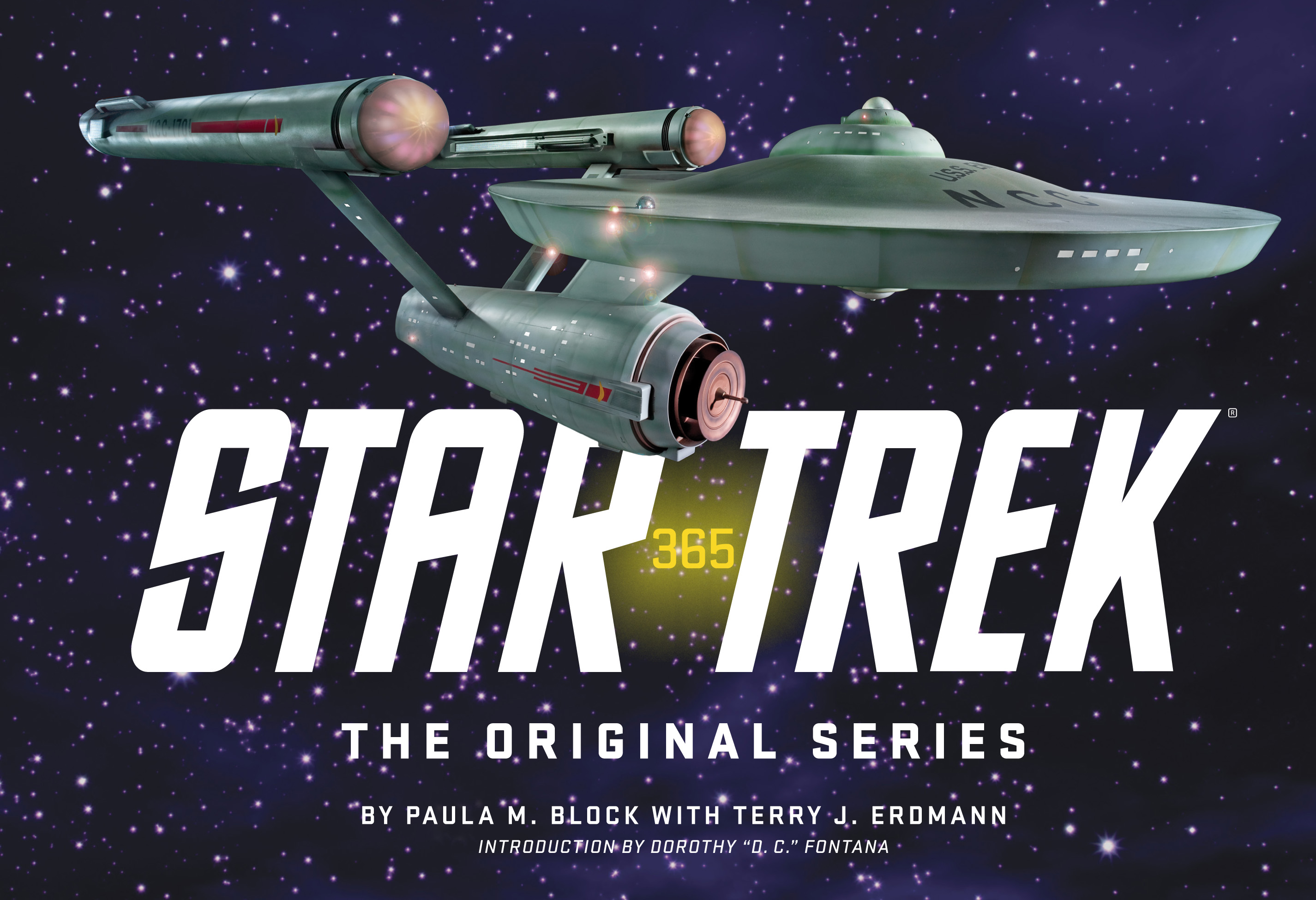 Just in time for the television icon’s 44th birthday and your Christmas list, Abrams adds to their delightful 365 library with [[[Star Trek]]] the Original Series. Let me state upfront that co-authors Paula Block and Terry Erdmann are friends and colleagues of mine but I cannot imagine any duo better suited to select the images and write the accompanying text for this volume.

Every episode and the original pilot are covered in this book with a nice design element with the page numbers colored to denote each season. The paper stock allows for strong color photography reproduction and even if you’ve seen many of these pictures before, you have not seen them this sharp.

Star Trek may be the most exhaustively covered prime time television series in history so the question immediately becomes, do I need this book? Well, completists certainly need it, but trust me, you want this. The authors take the best known stories regarding the series’ creation and production and cover them here, plus additional tidbits even we grizzled veterans might not have known. Visually, there are some personal pictures people involved in the series provided the book along with rare production drawings and images. One of the new images is one of Spock and Carol Burnett from [[[The Carol Burnett Show]]], an appearance I never knew about.

Each episode is recapped along with a few pages discussing stories regarding its creation or filming. Obviously, we can quibble over which ones got short-shrift (“[[[Whom Gods Destroy]]]” needed a picture of Yvonne Craig, for example) but the information brings some fresh perspectives. Threads from episodes that played out in the features or subsequent series or even novels are covered.

Paula and Terry do an admirable job admitting which episodes worked and which ones didn’t (and why) while only giving you a flash of the dirty laundry that some the books covered in greater detail. If anything, alluding to but not naming Fred Freiberger as the producer who let Star Trek deteriorate in its final season was an oversight.

Throughout, we learn biographical material on much of the cast but better, the spotlight is shared with the production crew from production designer Matt Jeffries to prop genius Wah Chang,

The book also embraces the fan base that kept the show alive for a third season and beyond. Bjo Trimble gets her due her along with the earliest of the fanzines and the final pages are devoted to the birth of the conventions and merchandise surrounding the series. Its cultural impact is also covered with the first space shuttle and the restoration of the 11-foot long model now on display at the Smithsonian.

Given Paula’s 19 year tenure working as publishing director for the consumer products department at Paramount/CBS, she certainly knew where to look for graphics. After combing through the licensing department’s archives for stock shots (a library she helped create!), she cast a wider net which gives the book a nice visual variety. Given the show was produced at a time extensive graphics were not maintained and licensing was usually an afterthought, the fact that she found over 365 good images is a testament. The book even went to the expense of original photography, shooting collector Gerald Gurian’s original series props.

This all-in-one volume is the only book you need in a newcomer’s Star Trek library and it is a most welcome addition to our groaning shelves of Star Trek memorabilia.