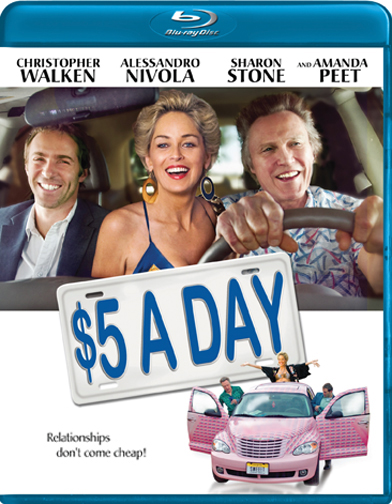 One of the great joys of reviewing movies for ComicMix is being offered little gems I’ve never heard of, the movies that come and go too quickly to gain much attention. For example, take [[[$5 a Day]]], which sports a solid cast led by Christopher Walken – right there, you want to see this, right? Walken rarely repeats himself and is always fun to watch on screen. He’s backed by Alessandro Nivola, Peter Coyote, Amanda Peet, and Sharon Stone so it’s a good crew.

On the surface, this sounds like your paint-by-numbers buddy/road film as an estranged father and son go on a cross-country trip. Even with that cast, it might be a little different, but now imagine the car is decorated in Sweet & Low packaging and that every stop along the way is precisely calculated to take advantage of complimentary food or discounted gas.

Nat is a broken man claiming to be dying of a brain tumor. His life irrevocably changed when he and the love of his life broke up and he became a drifting conman whose greatest pride is managing to live on $5 a day. Often it involves the ultimate in frugality such as saving box tops to get a Barbie-themed Polaroid camera which he regularly uses to take “photos for my wallet”.

Ritchie grew up, learning his dad’s cons and tricks, until he wound up spending 11 months in jail when one of the scams went south. He’s distanced himself from his dad and has been eking out a living as a health inspector but his inability to open up to Maggie means their relationship is breaking up. Nat’s summons to Atlantic City begins their reconciliation and the launch point for a poignant portrait.

The script from Tippi Dobrofsky and Neal H. Dobrofsky has been around
since 2003 when it looked like Nick Cassavetes was going to direct it.
Instead, three years later, it was seized by Nigel Cole who helmed the
small budget feature, which finally opening in May 2008 and is finally
being released this week from Image Entertainment.

Nat’s world is
an inventive one, scamming his way into professional conventions or
using fake IDs to score free meals at IHOP. But it’s also a tremendously
sad one and throughout the 98 minutes, we slowly learn the truth about
what happened to Ritchie’s mother while Maggie is provided glimpses into
her lover’s life through a series of confessional voice messages.

There’s
some predictability to this film, but the performance more than rescue
the film and make it worth your time and attention. Sharon Stone, for
one, nearly steals the film as Ritchie’s former baby sitter now a
scammer herself with a fake bronze tan and giant earrings.

The
movie, which looks and sounds as well as one could expect on a Blu-ray
disc, is accompanied by only a few extras including the director and
cast separately discussing the film and their characters, which provides
a few interesting insights. There’s a trailer and still gallery to
round out the package.