Spider-Man Swings To Broadway At Last 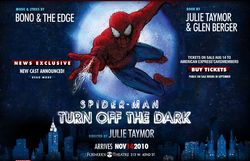 After an infinite number of delays, the Wonderful White-eye Webster will be swinging his tunes on Broadway at last.

Directed by Julie Taymor (The Magic Flute, Salome, Titus Andronicus and, oh yeah, The Lion King) and written by Taymor and Glen Berger, the Spider-Man musical will sport toe-tapping tunes by Bono and The Edge, evidently because Elton John was busy. It stars Reeve Carney in the lead, with Jennifer Damiano as Mary-Jane and Patrick Page as Norman Osborn and, of course, The Green Goblin.

Spider-Man: Turn Off the Dark opens at the Foxwoods Theatre,
formerly known as the Hilton Theatre, on December 21; previews start November 14. Ticket prices for this $50,000,000 extravaganza have yet to be announced, but the going rate these days for seats on Broadway is about $125 – $135 per. Take a family of four to Spider-Man after dinner and you’ve spent close to a grand.

You’ll be shocked to learn they’ve got a web-site.