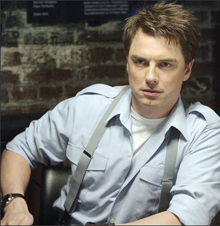 Creator/producer Russell T Davies has started serious work on fourth season of Torchwood. Right now, that means doing his writing bit – and gathering the other writers for the 10-episode season. His team lacks nothing in heroic fantasy street cred.

Despite the presence of five writers, the season is expected to be tightly woven together, more along the lines of the third season’s Children of Earth five-parter than the first two seasons, which featured single-episode dramas.

Once Davies has fleshed out the new characters, filming will begin in North America around the first of the year. This new season is being co-produced by the BBC and by Starz, and will be run in the United States next summer on the Starz premium channels.

John Barrowman and Eve Miles will be returning as Captain Jack Harkness and Gwen Cooper, respectively. It will be set at Torchwood’s
North American operation, and Barrowman will no longer be the sole American in the cast. The Doctor is not expected to make an appearance in this series, but one should not rule out Captain Jack returning to Doctor Who in the next season or two.

No word on the return of the weevils as of yet.

According to Zap2It, Russell T. Davies told a press tour that “Torchwood picks up a while after the events of ‘Children of Earth,’ but still deals with Capt. Jack’s state of mind after those devastating events… A new character, CIA agent Rex Matheson (who has yet to be cast), will serve to introduce new audiences. Rex has no idea what Torchwood is and has to investigate. We also have a watch analyst at the CIA called Esther. The two become embroiled in the Torchwood legend.

“The Welsh setting still features in a really significant way,” Davies continued. Gwen Cooper’s “story will take place in the U.S. but also very much in the U.K.” Davies also noted that Cooper’s husband and baby will be in the story, but James Marsters will not be in the next season.

He further noted that since Torchwood is on a premium cable network, it can have nudity and sex scenes but, as they always say, only if the story demands it. Right. Hello!!! We’ve seen the first three seasons of Torchwood!