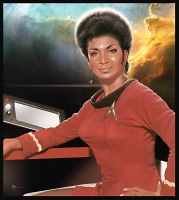 Several decades ago, one of our greatest Americans acted to save the original Star Trek show… as we know it.

After the first season, Nichelle Nichols decided her character, Lt. Uhura, was going nowhere and she had better things to do.
Producer/creator Gene Roddenberry tried to talk her out of it, but was unsuccessful. The following night, Nichols appeared at an NAACP fundraiser where she discussed her decision with a man who said he was her biggest fan. This man was a gifted speaker, and he talked her out of it. That man was Dr. Martin Luther King, Jr.

Earlier this week Nichols told a panel at the Television Critics Association press tour that Star Trek was the only television show he and his wife would permit their three children to watch, largely because the show portrayed a black woman as an astronaut. That was quite revolutionary back in the mid-60s, when black actors simply did not have regular roles on teevee – with the exception of I Spy (1965, the year before Star Trek went on the air) and Julia (1968, Trek’s final season). Nichols quoted Dr. King as saying, “You are part of history, and it’s your responsibility, even though it wasn’t your career choice.”

That’s pretty cool. Sadly, Dr. King wasn’t around to see
just how inspiring her character was, but he was a believer.