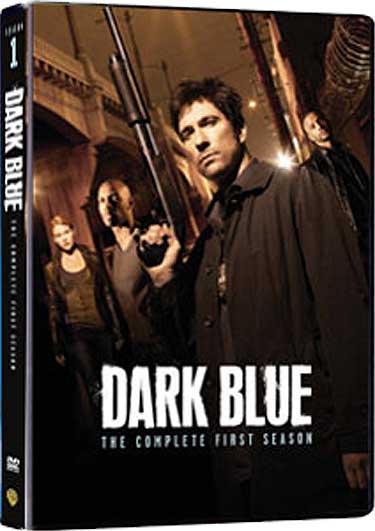 I have to admit to not being sure how much I like TNT’s [[[Dark Blue]]]. The series about an undercover unit operating in Los Angeles debuted last summer and for ten weeks my wife and I kept watching and wondering if it would get better. Slowly, and slyly, we found ourselves getting interested in some of the characters and kept watching.

The series opened with 3.5 million people watching the pilot episode but by the tenth episode, it shed just over half the viewers. Still, TNT had enough faith in the premise and Jerry Bruckheimer’s production savvy to bring it back for a second season starting August 4. Of note to ComicMix readers is the addition of Tricia Helfer to the cast as Special Agent Alex Rice.

Warner Home Video is showing a tad less faith by making the first season available tomorrow as an exclusive only at the WBShop.com and TNT.tv. Additionally, the ten episodes, on four discs for $24.95, comes without any additional features or commentary. We get just a short preview, without any substance, of the forthcoming season.

The show is built around Dylan McDermott’s Carter Shaw, who runs his operation away from police headquarters and does whatever it takes to complete his assignment. As a result, he pisses of his commanders and his team and raises the question how damaged a cop is he? McDermott broods exceedingly well, but without much of a character to portray, the harsh manner feels one-dimensional. Even his big story, the season finale “A Shot in the Dark”, doesn’t do enough to round him out.

We wound up far more interested in Ty Curtis (Omari Hardwick), a married cop trying to juggle how deep his undercover role can go and his commitment to his newlywed spouse. Dean Bendis (Logan Marshall-Green) is the one who goes too deep undercover and is only now beginning to willingly come up for air and sees how empty his own life has become. Then there’s juvenile delinquent Jamie Allen (Nicki Aycox) who escaped her criminal life in Detroit and faked a new identity to restart, becoming a cop who winds up recruited into the unit. She’s forced to use her real name and background in “Betsy”, a revelation that probably should have been saved for later, after we really got to know Jamie.

The stories have been the weak link as you care less about the cases and more about how the leads handle the tension. Each episode is self-contained and you’re told they’ve spent weeks building up a new role, infiltrating the criminal organization du jour, but you never saw those moments. We’re usually brought in when something goes wrong or the case is about to be closed.

The writing is solid if uninspired throughout and it lacks the high octane action of Bruckheimer’s CBS crime series. Still, you find yourself rooting for these cops to do the right thing, avoid temptation, avoid getting their cover blown, and avoid the interpersonal complications that can cloud their judgment.

With Helfer arriving next month, we can hope she stirs things up a bit and inspire stronger character-based tales.