James Bond Is A Goner? 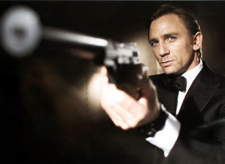 A couple months ago it was a simple suspension. The world continued to revolve, the property owners continued to license new books, and everybody thought one of the most
successful movie franchises – and one of the most successful reboots in modern media – would return after a short delay.

Today? Not so sure.

Bond 23 (that’s how they title them, until they actually title them) was suspended last April due to “financial troubles” on the part of the
studio, MGM. This is code for “we’re broke and we’re for sale.” Director Sam
Mendes, writer Peter Morgan, and star Daniel Craig were all lined up and
waiting for a start-date.

All they needed was a mere $200 million to make their budget and their 2012 release date. But now the London Mirror is reporting it’s all over, and the production crew has been told to seek work elsewhere.

Logic and history dictate eventually there will be a new James Bond movie – after all, they’re still making new Tarzan movies (occasionally) and just about every franchise is relaunched from time to time. Remember Sherlock Holmes? But, according to the Mirror, it could take years.

Sadly, I thought Daniel Craig was a keeper. So were Judi Dench and Jeffrey Wright. And it would have been nice to see John Cleese take another turn as “Q.” An indefinite delay of any real length jeopardizes the return of these performers.

I’ve spent my entire life going from James Bond movie to James Bond movie, and I’ve seen a lot of crap in the process. Loyal supporters – all of us aging baby boomers, I’m sure – deserve better. I’m just glad Warren Zevon didn’t live to see this.