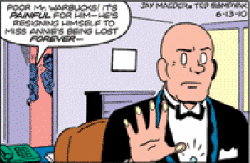 Damn, the old kid’s gone. And she’s taken the papers with her!

Last Sunday marked the end of the classic comic strip, Little Orphan Annie. That’s sad, but that sort of thing has been going on for a long time now and it was inevitable,
despite some first-rate work on the feature by Jay Maeder, Jay Maeder and artists Andrew Pepoy, Alan Kupperberg and Ted Slampyak. Ignobly, the syndicate ended Annie in mid-story.

The pompous New York Times turned not having comic strips into a virtue, but in fact at the time they could not afford to color presses needed to compete with Pulitzer and Hearst.

Today there is no such thing as newspaper competition:
most towns are lucky to have one daily paper, and most all papers carry the
exact same comics. With circulation zeroing in on zero, publishers are cutting back and, since they no longer need comics to compete, they’re vaporizing.

So goodbye, Annie and friends. And thank you.

ComicMix
editor-in-Chief Mike Gold performs a weekly two-hour Weird Sounds Inside The Gold Mind ass-kicking music and blather radio show on The Point every Sunday at 7:00 PM Eastern, replayed three times during the week (check the website for times). Likewise, his Weird Scenes Inside The Gold Mind political and cultural rants pop up each and every day at the same venue.