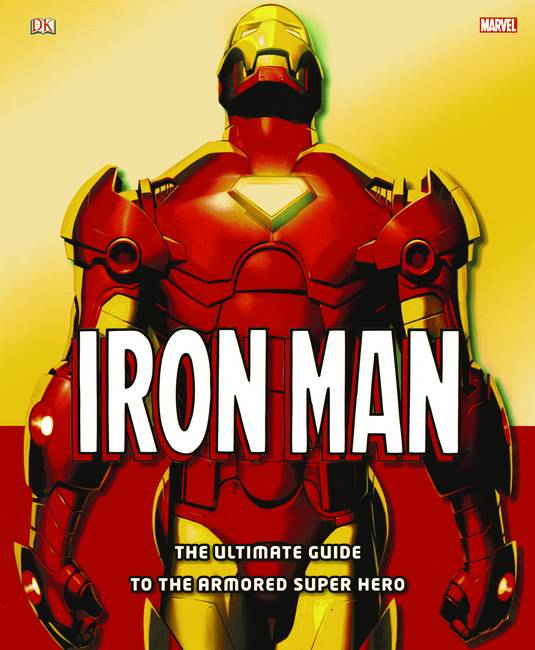 Anticipating today’s release of [[[Iron Man 2]]], DK Publishing released [[[Iron Man: The Ultimate Guide to the Armored Super Hero]]] back in February. The book, like last year’s [[[Wolverine]]] offering, is in their new thicker but shorter trim size and at 200 pages is chock full of information regarding only the comic book career of the Golden Avenger.

Matthew Manning, who also wrote the Wolverine volume (and is my co-author on [[[The Batman Vault]]]), returns to tell us everything about Tony Stark, his metallic alter ego and his friends and foes.

The book takes us through the origins of the character up through the beginning of the acclaimed Matt Fraction “Stark: Disassembled” storyline. Sections are devoted to his Stark Industries staff, his friends, his foes, and of course the many, many women in his life.

Maybe it’s because of Marvel’s own Iron Manuals, but the section devoted to his many armored incarnations is perhaps the weakest portion of the book. We get a few pages detailing how the more current armor works and then artwork depicting many but not all the variations. By using pick-up art in this manner, we’re treated to the work of many different artists but many of the shots are details and not full figures so for a visual guide, it feels oddly lacking.

Matt does a better job detailing the other sections starting with the various versions of Stark’s family business. Oddly, his spread on Pepper Potts seems written for people only familiar with her from the movie, ignoring her elopement and troubled marriage to Happy Hogan. Instead, that aspect of her life can be found in Happy’s own section.

A six page timeline concisely gives you what you need to know about the character’s career before getting into decade by decade sections with additional details. The 1960s was the decade it all got stated and the foundation was built. A little too much space is given to team-ups and battles and not enough given to the feature’s early Cold War-inspired stories or Stark versus Congress, rooting the series to the real world setting it apart from the other Marvel titles at the time.

The 1970s sadly gets the shortest shrift, with emphasis entirely on the classic “[[[Demon with a Bottle]]]” story. Yes, the series floundered after Archie Goodwin stopped writing it in favor of many hands until settling in with David Michelinie and Bob Layton in the latter 1970s. Still, the feature endured and should have been explored a little more.

Stark and Iron Man’s growing prominence in the Marvel Universe over the last decade does get a much stronger review and is among the best portions of the book.

Rather than devote two-pages to a montage of covers and splash pages at the end, the book could have benefitted from expanding the Ultimate incarnation of Iron Man from two to four pages to better explore how this Stark differs from the core Marvel Universe version.

Matt does a solid job keeping many of the convoluted storylines clear for readers – not an easy feat – and his affection for the character is clear. Similarly, the publication design is a little more straight-forward than some of DK’s hyperkinetic earlier offerings.

To be honest, this is one of those dream jobs I wish I had a shot at writing, but Matt does a fine job here and makes the character, his world, and his importance to the Marvel Universe clear. At $24.95, you couldn’t find a better resource on the Armored Avenger.